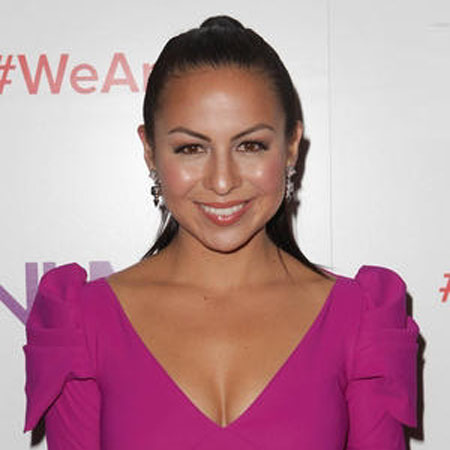 Anjelah Johnson is an American actress, comedian, and a former NFL cheerleader who rose to fame after she became a cast member of the thirteenth season of an American comedy sketch TV series,‘MADtv’. The actress has also played a number of iconic roles in several big-screen works like Our Family Wedding, Enough Said, and Moms' Night Out.

Anjelah burst into the Hollywood in 2006. She debuted her acting career from the TV series Love, Inc. She recently appeared in the comedy film, The Resurrection of Gavin Stone. Besides, she has also featured in several music videos and even released her studio album titled Gold Plated Dreams.

From her already flourishing career, Johnson has also made a large amount of net worth.

Anjelah Johnson was born Anjelah Nicole Johnson on May 14, 1982, in San Jose, California as one of the five children of her parents. Among her siblings, only two are known to media as  Kennie Johnson and Veronica Johnson.

Anjelah grew up in a joint family and is a Mexican and Native American descent. She has an American nationality.

Anjelah Johnson attended a local school in San Jose, California and was a cheerleader since she was 8. While she was at her senior high, she became interested in acting, basically imitating different accents.

After the Superbowl performance as a cheerleader, Anjelah Johnson moved to Los Angeles to pursue her career in comedy. Anjelah was then suggested by one of her friends to join in the improve classes to enhance her skills of cracking jokes.

It did not take long for Anjelah to be the internet sensation for her own shows that she uploaded to her YouTube Channel. She got her first recognition for her stand-up comedy on YouTube for the portrayal of a Vietnamese nail salon employee on the episode titled ‘Nail Salon’.

Anjelah Johnson served as the ‘TC Girl’, a spokesperson for Taco Cabana, a Mexican restaurant in 2011. She was the national campaign spokesperson for ‘Don’t be an S.O.V’ led by vRide in 2012.

The Resurrection of Gavin Stone is the upcoming releasing where Anjelah Johnson can be seen in the role of Kelly Richardson where she featured along with Brett Dalton, Shawn Michaels, Neil Flynn etc. Besides, she can be seen in the films Our family wedding, Alvin and the Chipmunks: The Squeakquel and enough said.

Anjelah Johnson's net worth is $500 thousand at present. He has maintained such a net worth from his struggle in his career.

Being a stand-up comedian and actress, Anjelah Johnson is reported to earn a very good amount of salary. From her illustrious career, the actress has also collected a decent amount of net worth in his life. She has landed a number of significant roles in both movies and TV projects.

In 2009, she was cast in the 2009 American computer-animated musical family comedy movie Alvin and the Chipmunks: The Squeakquel alongside Justin Long, Matthew Gray Gubler, Jesse McCartney, and Christina Applegate, among others. The movie became the instant hit at the box office grossing more than $443.1 million worldwide on a just $70 million budget.

Her another 2013 movie, Enough Said was also turned out to be commercially profitable making $25.6 million on a budget of $8 million. The movie was filmed in Los Angeles.

In the year 2009, Johnson also released her one-hour Comedy Central special under the title Anjelah Johnson: That's How We Do It which is priced $9.49 for MP3 and $14.99 for the Audio CD.

Anjelah Johnson grew up in a devout Christian family. She is a Christian by faith. However, she does not want to be called as a Christian entertainer.

Johnson has faced some negativity from the Christian fans which she addresses in an interview with FoxNews, as she lives on her own convictions and morals not to please her pastor or church or the fellow Christians.

Anjelah Johnson loves sports. She is good at soccer, softball, and track. She loves to dance as well and known hip hop and break dance.

Anjelah Johnson is very close to her family. She has a very good relationship with her siblings.

Anjelah Johnson is a married woman. She is married to an American Musician Manwell Reyes. Her husband Reyes is the member of Group 1 Crew. The couple got married in 2011 and has been spending a blissful marital life to date.

In an interview when asked about the plans to have children, Anjelah said that they are thinking about children. However, they are enjoying their time with their nieces and nephews, which of course can be sighted on Anjelah’s Instagram.

Anjelah and her spouse Manwell are leading a euphoric marital life and has been understanding and supportive of each other and there has been no any sighting or rumors of issues in between this couple.