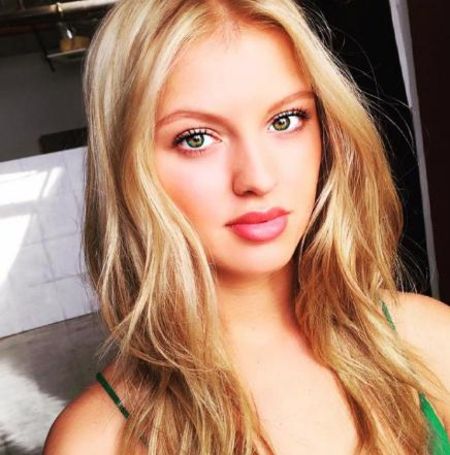 Angeline Appel is an American actress widely known for her roles in the Showtime series Shameless and MTV series Happyland. She has also played the role of Rachel in the 2015 television film, Babysitter's Black Book. She is currently in a relationship with Girl Meets World actor Peyton Meyer.

Angeline Appel was born Angeline Fioridella Appel on August 9, 1993, in Miami, Florida, the United States of America. Her mother's name is Caroline Appel while the name of her father has not been disclosed.

She and her family later moved to Puerto Rico where she was raised. She is the only child of her parents. She is of American nationality and belongs to white ethnicity.

Angeline Appel was interested in childhood since her childhood.  She made her acting debut with a role in the Showtime hit television series, Shameless, in 2011.

In the following year, she appeared as a Mob Dancer in the dance romance drama film, Step Up Revolution, starring Ryan Guzman, Kathryn McCormick, and Misha Gabriel.

Later in 2013, she appeared in the Freeform television series, The Fosters, starring Maia Mitchell, Cierra Ramirez, and David Lambert.

Appel was also cast in the thriller film, Statute of Limitations, alongside Louis Mandylor and Ashley Scott. She has also appeared in the popular MTV series, Happyland.

In 2015, she played the role of Rachel in a television film titled Babysitter's Black Book alongside Spencer Locke, Ryan McPartlin, and Ashley Dulaney.

Being a successful television and film star, Angeline Appel has earned a decent amount of money throughout her acting career.

The 26-year-old actress has an estimated net worth of $500 thousand, according to the Super Star Bio website.

As per the report, Appel earns $30 thousand to $40 thousand for appearing on an episode of a series.

Moving towards the personal life of Angeline Appel, the Babysitter's Black Book star is currently in a relationship with Peyton Meyer.

The two started dating in 2018 and ever since the relationship between them is going strong with every pa s sing day.

I chase dreams. And you’re mine. pic.twitter.com/YR3UP9m2jp

Prior to dating Meyer, Appel was in a relationship with To The Boys fame Noah Centineo, an actor who had appeared on The Fosters along with her.

Appel and Centineo started dating in 2016 and they had confirmed their relationship by sharing a kissing photo on Instagram together. However, the former boyfriend-girlfriend duo called it quits in the early 2018.