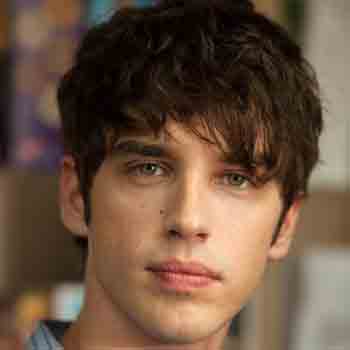 David Lambert, a very young talented actor, is best known for his role as Jason Landers in the Disney XD series called Aaron Stone. He is currently playing in the ABC family series called The Fosters as Brandon Fosters. David is a talented and energetic young man and is a promising actor.

In 2014, he was nominated for Teen Choice Awards for Choice Summer TV Star: Male category from the series The Fosters.

David Lambert was born on November 29, 1992, in Baton Rouge, Louisiana. He is young and learning. He has still a long way to go building his skills and adding his experiences. He has a bright future shining on his way as he has already made his impact on Hollywood.

David Lambert was born to an American father and a Puerto-Rican mother. He is of American nationality and mixed ethnicity.

Happy birthday to genuinely the greatest woman I know. My mom. I love you. What was this hat I had on?

He has two siblings, a brother, and a sister. He spent his childhood and teenage in England, Texas, and Taiwan. He has been living in Georgia for many years now. David is an avid fan of music. He has learned how to play piano, trumpet and is learning electric Guitar.

He is also good at singing. He has a very strong tenor singing voice. Besides acting, David has also a good future in the musical field if he chose to. Being active in the acting field from an early age, he completed his study through homeschooling. To his sad, he lost his father when he was 16 years old.

In the initial days when he was at the age of 3 years, he was cast in the play called Wizard of Oz. He did numerous theatrical shows include The Chronicles of Narnia: The Lion, the Witch, and the Wardrobe.

He also did Carisford in the Little Princess and Phao in the Jungle Book performances. He also appeared in an episode of Psych and also featured in the television show called Tyler Perry’s House of Payne.

He was discovered by agent Joy Pervis in Atlanta at an open casting call. He succeeded and got the call to pack for Canada as the main cast in the role of Jason Landers in the television film Aaron Stone in the year 2009-2010.

In 2010, he portrayed Goose in the television movie called Den Brother. Then, he appeared in the Hallmark Hall of Fame movie A Smile As Big as the Moon in 2012.

He appeared in a lead role in the drama film The Lifeguard in 2013. From 2013-18, he appeared in a family series The Fosters. He played the main character Bandon Foster- a 16-year-old pianist who is the biological son of cop Stef Adams Foster. He was nominated for the Teen Choice Awards for Choice Summer TV Star: Male in 2014.

David Lambert’s net worth is $3 million, as of August 2018. He earns decent money from his acting career. He owns a lavish car; a Mercedes Benz.

David Lambert is single as of August 2018. He is not dating anyone and is not have a girlfriend.

Lambert has a slim and lanky body posture with sexy killer looks. He is a bit introvert. There is no information about his personal life if he is gay or has been dating a girlfriend, his past girlfriends, and affairs. His female fans go crazy when he appears to be shirtless and seeing his shirtless pictures.