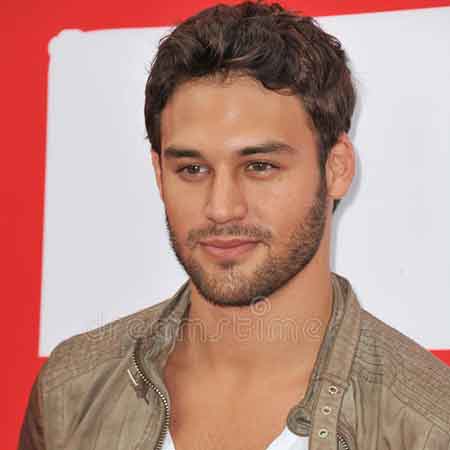 "The compliment that I like more than anything is when my family tells me I'm the same, Ryan. I never want to become a celeb who forgets about anybody or has a big head about himself". Born and raised in Abilene, Texas, American actor Ryan Guzman is a complete family person. He entered the world of entertainment in 2012 and has achieved huge success. Popular for his roles in movies and series like The Boy Next Door, Heroes Reborn, Everybody Wants Some!!, Guzman is considered as one of the great actors of the generation.

Ryan Guzman was born Ryan Anthony Guzman on 21 September 1987 in Abilene, Texas to Ray Guzman and Lisa (nee Hudson). His father is Mexican and mother has French, German, Swedish, English, and Dutch ancestry. At the young age, he moved to his mother's native city, Sacramento, California. He also has a younger brother named Steven. He is very close with his family and credits all his success to them.

As a child, he was interested in martial arts and picked up his first black belt in Tae Kwon Do at the age of ten. He was a Mixed Martial Arts fighter until his fighting license expired in 2010.

Ryan Guzman dream career was to be a baseball player but unfortunately, due to his shoulder injury, he could no longer play the game.  After that, he decided to try his luck in print modeling. He worked with LOOK Modeling Agency, later moved to Los Angeles in September 2010 and joined Wilhelmina Agency.

He also appeared in commercial campaigns for Old Navy, Candies and modeled for Abercrombie & Fitch and Reebok among others. Guzman then hired a skilled manager for a potential acting career.

After a few months, he got an opportunity to work in the fourth installment in the Step Up film series, Step Up Revolution in 2012. Guzman also appeared as a guest in two movies in the same year which includes 72 Hours with Empire and Made in Hollywood: Teen Edition.

In 2015 he portrayed the role of Noah Sandborn in the American psychological horror movie The Boy Next Door and as Rio Raymond in Jem and the Holograms and worked with actors like Jennifer Lopez, Kristin Chenoweth, Ian Nelson, Aubrey Peeples, Stefanie Scott, and Hayley Kiyoko.

As of 2018, Guzman appeared as Jonesie in Armed and has worked in the television series like Cameras, All the Right Moves, Pretty Little Liars, Notorious, Chopped Junior. Similarly, he is working in the American drama series 9-1-1 as a leading role Eddie Diaz alongside Connie Britton, Angela Ba s sett, Angela Ba s sett, Oliver Stark, and Aisha Hinds.

Step Up actor Ryan Guzman is enjoying a flourishing acting career and from his successful career, the American actor is earning an impressive amount of money. However,  his net worth and salary are not revealed yet.

Being a popular actor, it is obvious that his net worth is over $1 million. His movie Step Up Revolution, made with the budget of $33 million acc u mulate a tremendous money of $140.5 million at the box office.

Ryan Guzman is dating Chrysti Ane. The couple is together for many years. In September 2018 Guzman announced that he is expecting his first child with longtime girlfriend, Ane. The pair is all set to become a parent and is residing in Los Angeles, California, U.S.

2018 has been a year of unexpected surprises. New jobs, new lives, and new love. Each one getting better than the next. As the year rounds the corner to its end, we both believed it couldn't get any better. We were wrong! The newest/best surprise has yet to arrive but is on it's way. To living our BEST lives! #DaddyAndMommy #Mateo Or #Genevieve

Previously, he was in a romantic relationship with model Melanie Iglesias from 2013 to 2015.  After three years, the duo broke up. He affirmed the news via Twitter.

“Since everyone will eventually find out anyway, unfortunately, I’m single again…”

Guzman is always admired for his body. Once, he disclosed that his favorite workout is Mixed Martial Arts training.

Check out his video talking about his movie The Boy Next Door.