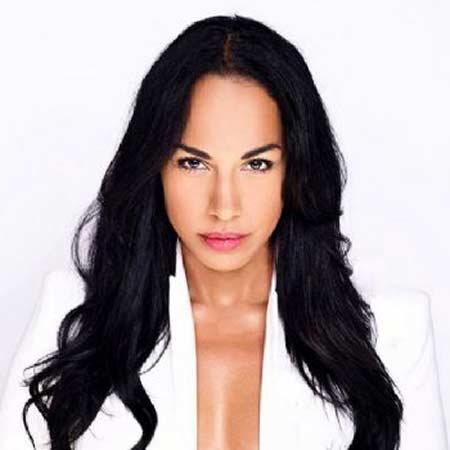 Amanda Brugel is a Canadian actress best known for portraying the role of Michelle Krasnoff in a Canadian series Seed. She has been present in the television and movie industry from the year 1999, debuting in the movie Vendetta and is wowing us till present. Brugel holds a degree of Bachelor of Fine Arts from York University. The actress won Best Actress Black Canadian Award in 2015 and won outstanding female performer in the Actra Award for her performance in the comedy movie Sex After Kids. She went huge in the industry with the Hulu series, The Handmaid's Tale and is cast in its second season as well which premiered on April 25, 2018. The show announced it's third season renewal on May 18 of the same year.

Amanda Brugel was born on March 24, 1978, in  Pointe Claire, Quebec. Canada. She belongs to mixed ethnicity with her real father who she never got to meet was African- American and her mother was born in England but later moved to Canada.

Brugel was adopted by a Jewish- Indian father. While growing up she had to learn about various histories and culture related to her family because of her mixed ethnic background.

Brugel stepped onto the field of acting when one of her teachers persuaded her to act out in the school play. She landed the role of Anne in the play named, Anne of Green Gables and was offered a full-time scholarship at York University to learn theatre.  After graduating from the university in 2000, she realized soon enough that the theatre work she was involved in was just a small step.

CAPTION: Amanda Brugel at the season 2 premiere of The Handmaid's Tale SOURCE: Hawtcelebs

She had a reality check about the real global stage where she had to prove herself, even more, to be accepted. Brugel struggled quite a lot in the beginning as her multicultural personalities were misunderstood and people were confused about the way she looked and spoke.

She was about to quit the profession but her then-boyfriend convinced and told Amanda she hasn't done enough. And that was the beginning of the long journey for the actress.

She soon dedicated herself to the field of acting which eventually paid off as she fetched a role in the CBC TV series, MVP. During the same time, she was also considered as one of the promising actresses of her generation.

Brugel is a Canadian actress who debuted in the movie industry in 1999 with movie Vendetta, an HBO original movie based on actual events that occurred in New  Orleans on March 14, 1981. The following year she was cast in "A Diva's Christmas Carol" along with huge stars like Rozonda Thomas, Vanessa Williams, and Kathy Griffin.

For the next 3 years, she appeared in a string of movies like KAW, Splice, and Jason X including TV series, Soul Food, Paradise Falls, MVP, Kevin Hill, Saving Hope, Nikita,  Covert Affairs, the firm, The Ron  James show and many more.

Burgel's career took a huge leap when she enacted in 2013 Canadian comedy movie " Sex After Kids" where she appeared as Vannesa. Her role in the movie led her to win an Actra Award for an outstanding female performer.

She was cast in a Canadian sitcom series called "Seed"  but the series lasted only a year. She continued to play many characters in many movies and TV series later. She got cast alongside Susan Sarandon in the movie " The Calling" in 2014 and did many movies including Suicide Squad, Room and Map to the stars as time passed by.

In 2016, she starred as a recurring character in the USA TV series named Eyewitness and also in the sitcom Kim's Convenience. Recently in 2017, she was a part of a Hulu series The Handmaid's Tale, alongside Max Minghella, Elisabeth Moss, Madeline Brewer, and others. In the following year, the actress went on to play the role of a doctor in the movie Kodachrome.

Amanda Brugel's Net Worth And Salary

Amanda Brugel's net worth is quite controversial but many claims she has an estimated net worth of whopping $6 million, as per some sources. She is the founder of  Brugs Army, a non-profit organization founded to help secure the lives of women and children.

Thank you @afrostylemagz for the lovely feature! And thank all of YOU for the love you’ve shown this most quiet gangster. Link in bio for full article. : @caitcronenberg #rita #marthalife #brugelxcronenberg

One of her cast members, Elisabeth Moss earns around $200,000 per episode of The Handmaid's Tale. She is also one of the main characters of the show, so we can assume the actress earns around the same figure as Moss.

Brugel is currently the Brand Ambassador of Birks Jewellers.

Amanda Brugel tied the knot with her longtime boyfriend Marcel Lewis on March 7, 2008. They have two children both boys named Jude Mason Lewis and Phoenix Lewis who was born on February 7, 2012, and June 20, 2014, respectively.

Her husband Marcel proposed her in Malibu, California after dating for a while. Earlier this year, during her 40th birthday, she and Marcel went to the same exact spot where he proposed many years ago. It's been over a decade that they are still sharing the loving relationship with no rumors of divorce.

This time though, they had two more guests, their adorable boys. In an interview, she revealed that during childhood, her celebrity crush was David Bowie.