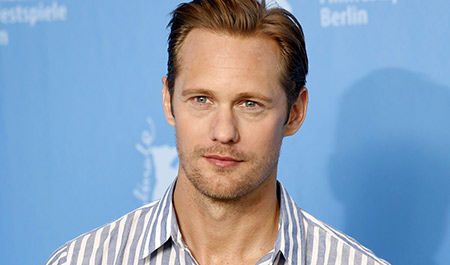 Alexander Skarsgård is one of the prominent figures in the world of acting. The actor gained initial fame following his role in the miniseries Generation Kill and made his biggest breakthrough after taking a role of notorious bad-boy/Viking vampire, Eric Northman in a massive hit TV series True Blood. He gained further acclaim after his Award-winning role in another most viewed TV series Big Little Lies.

Alexander Skarsgård was born on 25 August 1976, in Stockholm, Sweden. He is Swedish as per his nationality and ethnicity wise; he is mixed. He is the son of actor Stellan Skarsgård (father) and his first wife, My Skarsgård (mother), a physician. Her parents got married in April 1975 and divorced in May 2007.

Skarsgård has five younger siblings; four brothers Bill Skarsgård, Gustaf Skarsgård, Valter Skarsgård, and Sam Skarsgård as well as a sister named Eija Skarsgård. His father's friend, who was a director offred him to play Kalle Nubb in an adaptation of the popular children's book Ake and his World at 7.

The actor quit acting for the next seven years. After a prolonged period of goofing off with his buddies, Skarsgård joined the national service at the age of nineteen. During his 18 months in an antiterrorist unit in the Swedish marines, he trained in combat, small-squad battle tactics as well as anti-sabotage attacks. After leaving the force in 1997, Skarsgård went on to attend Leed Beckett University for six months, in England.

After such a crazy hiatus from acting, Skarsgård moved to New York City and joined a theater course at Marymount Manhattan College. He later relocated to his native country in order to resume his acting career.

Following his decade long break from the mainstream, Alexander Skarsgård started playing in a variety of Swedish film and television roles. He landed his first big-screen role as an airheaded male model in the wildly popular 2001 comedy Zoolander.

Alexander later worked as a writer and director for To Kill Child, Sweden acclaimed short film. He gained massive fame following his role in the miniseries Generation Kill in 2008. The same year, his career got a new height after his breakout role in Alan Ball's HBO series True Blood.

He played the role of Eric Northman, a powerful 1,000-year-old Viking vampire until 2014 sharing the screen alongside Anna Paquin, Stephen Moyer, Sam Trammell, and Ryan Kwanten. 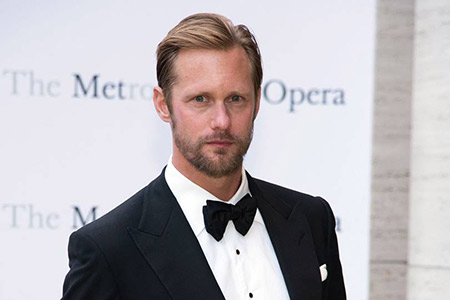 A critically acclaimed actor in Sweden, Skarsgård's finest performance in massive hit HBO TV series Big Little Lies make him a full-fledged star in the Hollywood as well. He has been playing the role of Perry Wright in the series since 2017 alongside Reese Witherspoon, Nicole Kidman, and Shailene Woodley. In 2019, the actor was a cast in the movies The Aftermatch, Long Shot, and The Kill Team.

His upcoming project is Godzilla vs. Kong.

Alexander Skarsgård has won many prestigious accolades for his work in movies and TV series. His role in the TV series True Blood earned him four Scream Awards. Furthermore, the actor won Primetime Emmy Awards for Outstanding Supporting Acor in a Limited Series Big Little Lies, in 2017. He also won Golden Globe Awards, Critics' Choice Awards, and more for his work in the series.

Alexander Skarsgård has an estimated net worth of around $12 million, as per celebrity net worth, in 2019. He was cast in the TV series Trube Blood from (2008-14), and his salary per episode was $275 thousand.

The actor has also worked in many commercially successful movies. In the year 2016, he appeared in the film The Legend of Tarzan which grossed a whopping box office collection of $356 million worldwide against $180 million.

In 2015, Skarsgård sold his bachelor pad for $2.9 million. It is located at Los Feliz area in Los Angeles, California. After a couple of years, he went on to spend $2.3 million to buy an apartment in New York City’s East Village, which previously owned by Parker Posey. The 1,100 square feet features one bedroom and one bathroom.

He has a huge cars collection and here is the list of his luxurious cars:

Alexander Skarsgård is not married yet but has been in a relationship with many Hollywood divas. The actor is currently dating Alexa Chung, a model, and fashion journalist. The lovebirds briefly broke up in July 2017, but now the two are back together again.

In the year 2008, the actor was in a relationship with Amanda Seyfried, American actress, model, and singer. Their love affair, however, did not last long and parted ways after a few months later.

At the beginning of 2009, the actor briefly dated Izabella Anna Mikołajczak, a Polish dancer and actress. Sources reported that the power couple met for the first time on the set of the critically acclaimed series True Blood. They reportedly split up in early 2010. Skarsgård also dated his Straw Dogs co-star Kate Bosworth from 2009-2011.

In the following year, Skarsgård romantically involved in a relationship with Ellen Page and broke up in 2013. The same year, the actor was rumored to have dated pop star, Taylor Swift. Reportedly, Skarsgård dated several well-known actresses like Margot Robbie, Charlize Theron, and Leonardo DiCaprio.

Alexander Skarsgård has also been a part of many non-profit organizations all over the world. He helped to raise money for the Hammarby IF, a club based in Stockholm, his birth city. He also became the Ambassador for Walking With The Wounded which aims to collect money for wounded soldiers through the event. He also worked with Prince Harry team for several wounded soldiers.