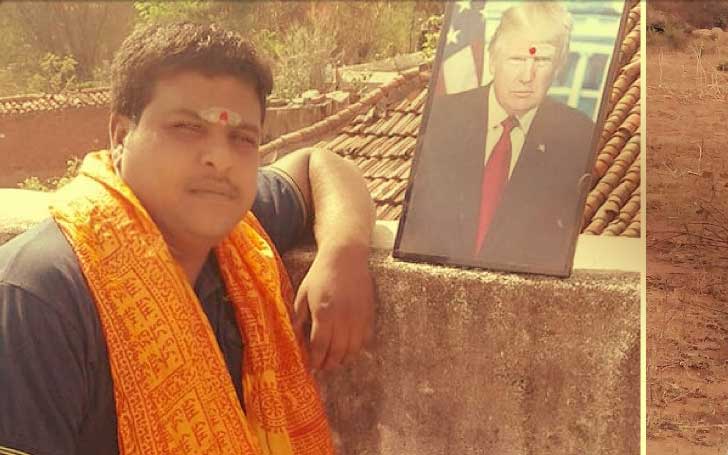 Some of us believe in God and some not, but the existence of God is something which has been questioned for centuries, however, it is yet to be answered. Whether we believe in God or not, a South-Indian man has got his God. Yes, what you read is right.

Bussa Krishna from Telangana, a southern Indian state is a devotee of 45th American President Donald Trump that he worships him as a Hindu God.

Krishna, who lives thousands of miles away from the United States, caught media attention this week after he posted a photo of him worshipping the US president as a god.

According to the source, Mr. Krishna has a distinctive picture of Trump inside his house decorated with flowers and fruits alongside the traditional Hindu Gods. The source also confirmed he prays and professes his love for Trump every morning.

The 31-year-old farmer who is known as Krish Raju on Facebook frequently posts photos and videos of him worshipping his Trump shrine in different ways. In one of his recent videos, he was seen washing Trump's picture with milk like the Hindus do with their god.

Where Trump has been frequently criticized for his activities since he took his seat in January 2017, Krishna seems to have fascinated by his strong persona and the "boldness with which he takes his decisions."

I worship him every day after worshipping my favorite Gods.

I believe Indians can win over anyone with their spiritual powers. When you cannot take on a mighty person directly, you can win over him with love and worship and that is what I am doing.

Mr. Krishna, who wants to meet Trump personally, claimed even Trump had tweeted about him on June 19, 2018.

Some of Krishna's friend from the US also took interest in commenting on his Facebook posts where one of his friend from New Jersey wrote,

India people love our President. [B]ecause they know he is not a part of the corrupt global elites. [A]nd he is against NWO [New World Order]

Another wrote from New York,

Thank you dearly, my Indian Friends. As an American Trump supporter since day one I send all you Trump supporters out in India the most positive of vibes, energy, God's blessings [and] white light. I love Indian cuisine, I fin[d] vastu shastra fascinating [and] love the [Bollywood] music videos.

Krishna even takes Trump's photo on his work field and farm. Ironically, he does know only a little about Trump. He said the only thing he knows about Trump is he is the strongest and invincible leader in the world.