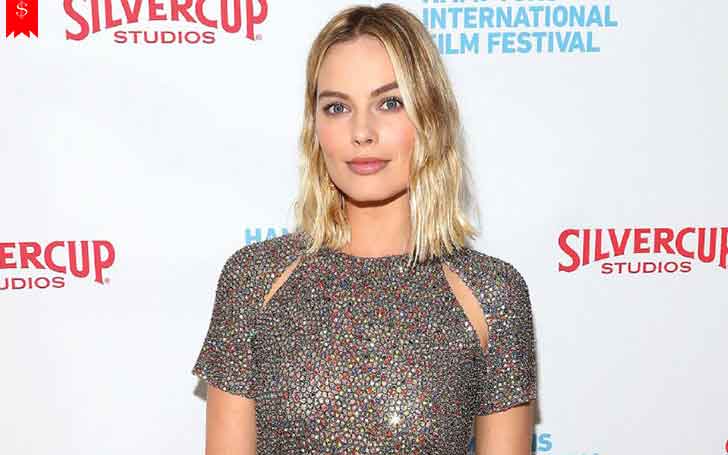 Australian gem Margot Robbie started her career with roles in Australian independent movies and television, however, her career took a drastic change when she moved to the USA. After few auditions and minor roles, she received the first recognition when starred in the popular movie 'The Wolf of Wall Street' alongside Leonardo DiCaprio.  She is currently one of the top leading actresses of Hollywood.

Along with name and fame, she also accumulated a huge income. Wanna know more about her career, net worth, and income source? We have all the details here.

How Much Is The Net Worth Of Margot Robbie? Also, Know About Her Income Sources

Margot Robbie who will soon be starring as Sharon Tate in Once Upon a Time in Hollywood in 2019 has an estimated net worth of about $12 million as per Celebrity networth while it is about $8 million as per the Richest.

She has really made it big in the industry for the last few years; thanks to the highly successful movies she played. She rose to prominence performing in the movie The Wolf of Wall Street. The movie was an international success making $392 million worldwide.

Her Assets- Houses, And Cars

I, Tonya star Margot Robbie planned to start the year in the brand-new home. Being fed up of spending months in hotels and Airbnbs, she revealed that she purchased a house in Los Angeles. Keeping her married life a mystery for some time, her new Hancock Park home was a surprise for all her fans.

She bought the 5.5 bathrooms home for $2.73 million in January 2017. The home features brass, chrome fixtures, and paneled walls.

She kept her Byron Bay beach house for sale for $3.9 million in March 2018. The beach house situated right in front of the sea includes three bedrooms with classical nautical design in the entire property.

Not just movies and TV series but Robbie also makes money from endorsements and campaigns. She was the face of Calvin Klein's Deep Euphoria fragrance in May 2016.

In 2017, she performed in a commercial promoting Nissan electric vehicles that potentially earned her $1 million (£720,300).

She became an ambassador for the luxury fashion brand, Chanel in February 2018.

Robbie received a number of award nominations for her role in The Wolf of Wall Street in 2013. She won Empire Awards for Best Female Newcomer for American biographical black comedy.

Thank you to the divine @jonathanvanmeter for letting me tat you up for our @voguemagazine interview!

Moreover, she has a long list of nominations along with an Academy Awards nomination for Best Actress for I, Tonya.

Actress Robbie has become the latest partner with luxury watch brand, Richard Mille. It produces a range of women watches and the proceeds was set to be donated to Youngcare in 2017. Youngcare is a foundation dedicated to helping young Australians with all the needs that include living with dignity, choice, and independence.

Back in 2014, she donated a cash prize that she won in a bizarre radio competition in New Zealand.

While performing in the movie Tarzan in the Philippines in 2015 she urged her fans to help improve the quality of life of poor and needy kids of the Philippines.

She posted a selfie with a group of children via Instagram and requested her followers to erase the poverty of the country donating money to the Rise Above Foundation.