YouTuber Markiplier's Girlfriend is Amy Nelson, Know All the Interesting Facts about their Affair 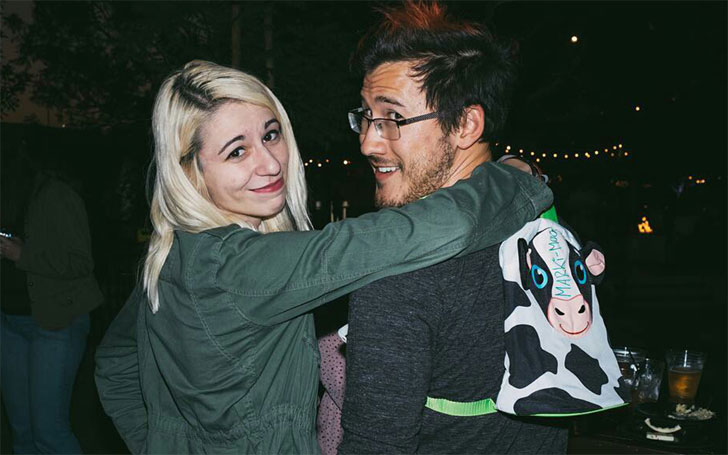 Popular YouTube star Markiplier who has made his name making millions of people laugh and cry with his performance is no less than other Hollywood celebrity. Mark Edward Fischbach or Markiplier as his fans know him as more than the fun and sarcastic personality he's in his videos.

Always wanted to learn Markiplier's personal life details? Well, hang on because we have a report with full details here!

According to a source, YouTube personality Markiplier is in a relationship. He is dating  Amy Nelson who is a graphic designer and an illustrator.

Twenty-seven-year-old YouTube star Mark and Amy Nelson are dating since 2015. But they didn't announce their relationship officially until mid of 2016. The couple first appeared together during Vidcon 2016. But, before making any official announcement the rumor of their dating spread all over. They both prefer to maintain their love life low profiled. However, they sometimes give in to the culture and share each other's pictures.

Nelson who is quite active on her social media accounts shared a picture of them together on 7 April 2017 where we can see how cute they look next to each other.

Nelson also appeared with Markiplier several times on his YouTube channel. She was first seen in Markiplier’s channel in the video, “DON’T LAUGH CHALLENGE #5.”

Markiplier and his girlfriend Amy have been enjoying a healthy relationship for a long time not. They still seem more supportive and devoted to each other. Despite their long and loving relationship, the couple yet to share any clue regarding their married. He also posts many photos of his girlfriend on his social media. The YouTuber currently resides in Los Angeles, California.

YouTube star Markiplier whose original name is Mark Edward Fischbach has established his channel as 23rd most subscribed channel on YouTube with over 24.3 million subscribers and over 11.7 billion total video views as of June 2017. He is listed on the top five richest YouTubers of 2017.

He started his YouTube career from 26 May 2012 with username Markiplier with playthrough video game Amnesia: The Dark Descent. Markiplier's first YouTube channel was banned by YouTube due to AdSense issue, so, he started his second channel MarkiplierGAME which his current channel.

He scored more popularity after his channel was listed on top 61 by the New Media Rockstars in 2014. He then started comedy collaboration with other YouTubers. Markiplier is also pretty regular on Fine Brother's React channel.