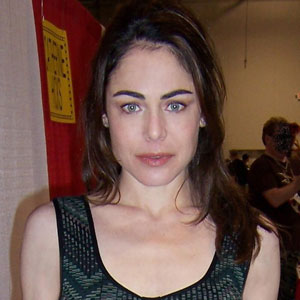 Saturn Awards winning actress, Yancy Butler is an actress popularly known for her roles in Hard Target and TNT drama series, Witchblade. Butler made her Hollywood debut at the very early age of seven from the movie, Savage Weekend.

Yancy Butler is currently single after the break up with her former boyfriend. She was charged with several allegations.

Butler is American as per her nationality and as far as her ethnicity is concerned, she is White. She is the daughter of Leslie Vega (a theater company manager) and Joe Butler (a drummer and vocalist of The Lovin’ Spoonful, 1960s rock group). His father was a friend with JohnLennonand Yoko Ono.

Butler studied at New York’s prominent HB Studios in 1985. She learned to dance and ballet from Joffrey and Ailey School. In 1991, she earned Bachelor’s degree in Liberal art from Sarah Lawrence College. She was also honored with a Griggs Scholar.

Yancy Butler made her Hollywood debut at the age of seven. She played in the movie, Savage Weekend in 1979. She then appeared in the TV series, Man & Machine in 1992. she portrayed an android police officer partnered with a human detective/

In 1993, Butler appeared in Hard Target, which came out as her breakthrough movie. She shared the screen with Jean-Claude Van Damme, Lance Henriksen, Arnold Vosloo, and Kasi Lemmons, among others.

Butler appeared in various movies like Let It Be Me, The Ex, Ravager, Kiss-Ass, Hansel &Gretel Get Baked, and Kick-Ass 2. She worked in many TV series including Witchblade, Lake Placid 3, and The Mentalist.

In 2017, Butler worked in the movie, Death Race 2050 by G. J. Echternkamp. She portrayed Alexis Hamilton in the movie. The following year, she played Carrie Ellington in the TV film, Boyfriend Killer.

Yancy Butler's Net Worth And Salary

Yancy Butler's estimated net worth is $1.8 million as per some online sources. She has earned a decent amount of salary from her acting career.

She has appeared in the movies and TV shows including Lake Placid: The Final Chapter, Rage of the Yeti, As the World Turns, Witchblade, South Beach, Kick-Ass 2, Hansel & Gretel Get Baked, Striking Range, The Last Letter, The Ex, Ravager, Let It Be Me, and Drop Zone.

Here are the movies of her that made a good collection at the box office.

Yancy Butler is unmarried and has no children. She resides in New York City, New York.

Previously, Butler was in a relationship with her co-star Jeff Fahey. The couple shared deep chemistry on-screen as well as off-screen.

The relationship between them did not last long and broke up for some undisclosed reasons. She is not involved in any relationship after the break-up.

In 2003, Yancy Butler was taken to the custody in Delray Beach, Florida for disorderly intoxication. She was sentenced to a substance-abuse treatment program after a cop found her stumbling in and out of traffic.

Butler said that she was an alcoholic who was on medication, according to a Delray Beach Police report. At first, she said she'd been kicked out of a halfway house, but later said she was still in one, the report said

2007, was arrested in Sag Harbour after the police found her passed out drunk behind the wheel of her car. Her car was found crashed on the sidewalk of the main street. During the time, a half-empty bottle of Smirnoff Voda was found from her purse. Besides alcohol, there were some 14 pills in her purse one of them was prednisone whereas rest were anti-anxiety medication. She was not able to walk after the accident so was rushed to the hospital.

According to the police, while Yancy Butler was returning, she spits on the faces of arresting officer multiple times. She was again taken back to the hospital for the treatment of alcohol withdrawal.

After several investigations, Butler was charged with seventh-degree criminal possession, aggravated driving while intoxication, and second-degree harassment, a violation. The same year, she was released on $500 bail.