Who Is Ashlyn Harris Dating? What Is Her Sexuality?

It's quite strange how a person finds their soul mate. We generally think that when two champions meet, the feeling of rivalry and sense of competition may arise, but it’s different in case of the lesbian couple; Ashlyn Harris and Ali Krieger.

So, how is Ashlyn Harris’ relationship with beau Ali Krieger different from the rest of the couples? How did their love blossom? Are they engaged to be married or already married? We have all the details here!

Turning the pages of Ashlyn Harris’ relationship with Ali Krieger, the pair’s chemistry began at the soccer field after their first encounter back in 2010. With their excellent skill in soccer, they soon became a teammate playing for Washington Spirit.

While training, the pair talked about their dreams and hopes which led them towards falling in love with each other. Krieger once revealed that it was Ashlyn’s creativity and ambition which attracted her. 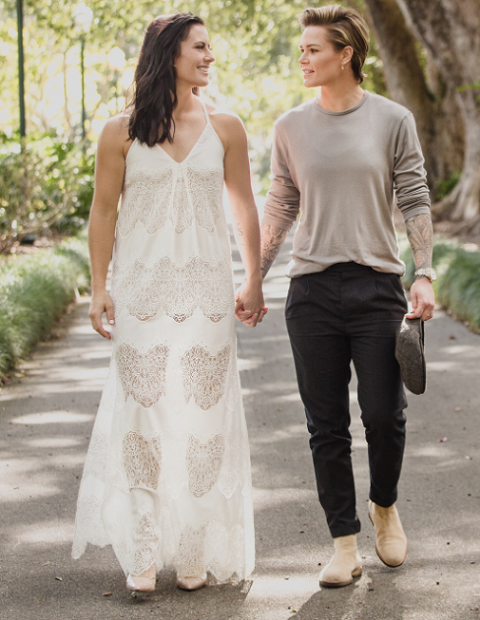 On another side, Ashlyn claimed that Krieger’s assertiveness and independence manipulated her. Moreover, her beautiful brown eyes also attracted her.

The pair currently play at the National Women Soccer League with Orlando Pride where Krieger is a defender and midfielder while Harris is a goalkeeper. Recently, both the couple achieved what every athlete would want from their career, the World Cup Trophy. America beat the Netherlands 2-0 in the final against the Netherland on 7th July when both of them were benched. Moreover, both the lovebirds were part of the US team when they won the 2015 World Cup in Canada.

Is Ashlyn Harris Married to Ali Krieger? Are They Engaged?

Ashlyn Harris is yet to be married to partner Ali Krieger, but are engaged and totally in love with each other.

Firstly, Ashlyn and Krieger, who started dating since 2010, have always tried their best to maintain a low-key relationship. It is reported that the pair began dating after just a couple of meetings.

In March 2019, the pair shocked their fans announcing that they were got engaged since September 2017. As per reports obtained by PEOPLE, Ashlyn proposed her love in September 2017 while they were in a romantic getaway to Clearwater Beach, Florida.

Even though they have managed to keep their relationship private, sources are admitting that they are planning to get married in December 2019. They might be exchanging the vows in Florida.

As of now, there is nothing disclosed about the pair’s children, but they might be welcoming children pretty soon.