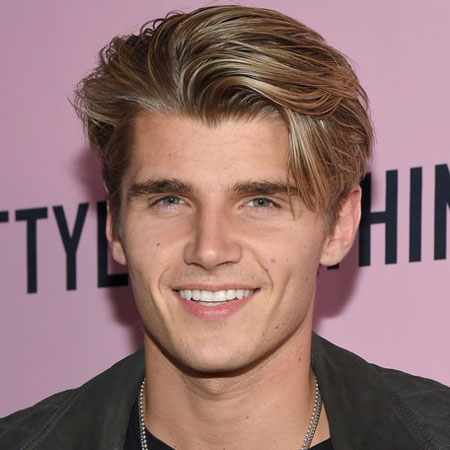 Born and raised in the Netherlands, Twan Kuyper is a YouTube sensation. As of 2019, he has more than 1.4 million followers on his self-entitled YouTube channel. He rose to fame after gaining a million followers on Vine initially. Kuyper is in a romantic relationship with Hannah Stocking, his girlfriend since 2017.

Twan Kuyper was born on February 19, 1995, in the Netherlands under the birth sign Pisces. He is Dutch and belongs to the Caucasian ethnicity.

Kuyper was raised along with a brother who is now known as Jaz and his sister, Lisa, are two among the four siblings. He often makes YouTube videos along with his siblings too.

Twan Kuyper had a keen interest in modeling since his early days. He started his modeling career at the age of 16 and has appeared on several cover shoots, print campaigns, and runways. In 2013, he moved to South Florida to enhance his modeling career. He also did modeling for Next Models.

In 2015, he featured in the parody song of Fifth Harmony's Worth It. After a year, he got roles in Woman on the Edge and The Broken Record. The same year, he toured with Digitour to directly connect with his fans.

Kuyper started his YouTube channel, "Twan Kuyper" on March 2, 2015, and as of 2019, he has more than a 1.4million subscribers and more than 14 million views on his channel. The same year he signed with 26MGMT.

Twan Kuyper's Net Worth And Earnings

Twan Kuyper is one of the rising social media stars, who earned a good sum from his social sites. As per some online sources, his estimated net worth is $2 million.

Twan Kuyper was in a romantic relationship with London Goheen. The duo started dating in October 2017. The couple, however, did not last long and parted ways after a year of their love affair. His ex-girlfriend London is currently in a relationship with Reece Hawkins. Then who is Twan Kuyper dating in 2019?. As per his social media, it is quite clear that the social media star is currently dating Lele Pons. The couple also reportedly dated in 2015 and 2016.  But as of now, their social media is flooded with beautiful pictures of themselves.

He keeps his 7.3 million fans on Instagram updated by sharing cute pictures with a number of female friends.

In 2015 he was linked with Lele Pons and the following year rumors spread about his romance with Hannah Stockings.

The popular Forbes magazine called him, The Future of Influencer and Brand Collaboration.  He is a huge fan of Kevin Hart and dreams to meet him once in his lifetime. Kuyper shares a good bonding with YouTubers,  Lele, Rudy Mancuso, Christian Delgrosso, Bart Baker, Alec Bailey, Hayes Grier, and Nash Grier and collaborated with them on several videos.

Besides making videos, Kuyper loves to play basketball and follows a strict fitness regime to maintain his body.

The YouTuber has also a decent fan following on his Instagram with over 7 million followers as of 2019. Along with his loving girlfriend, the social media star often shares romantic pictures with his social media.