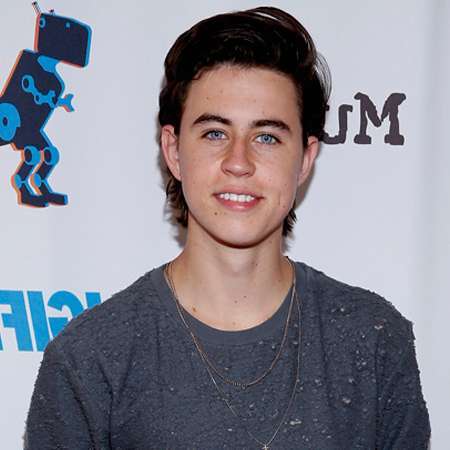 Nash Grier is a famous YouTuber and former Vinestar. He is also a part of the touring group ‘Magron,’ which stands for Meet and Greet Convention.

His channel has over 4 million subscribers as of 2018. He has also appeared in few TV series and short films. In 2017, he featured in TV mini-series High School Cupid, a Cupid Inc. Story.

Nash Grier was born on 28 December 1997 and was raised in Northern California. He is the proud son of Elizabeth Floyd and Chad Grier, who is one of his managers.

He is the second oldest child of the family — he has a younger brother, Hayes, who is also an internet sensation; an older brother, Will Grier, who is a quarterback for the West Virginia Mountaineers; and a younger half-sister, Skylynn,  whom his mother had with her current husband John Floyd.

Nash Grier was studying at Davidson Day School when the mobile app Vine was released, which allows users to post looping six seconds videos for others to view.

He slowly began posting comedy-related videos for and classmates and friends. However, his videos began gaining a tremendous response from the viewers, and he quickly amassed a wider fanbase.

Shortly, after Nash Grier rose to fame, he joined the touring group ‘Magcon’, which was a convention where a fan could meet and interact with their favorite internet personalities.

However, in early 2014, he, along with a few other members, quit the group as they felt that it limited their future careers as they were interested in pursuing other goals.

In 2014, Nash moved to Los Angeles, California to pursue his dream and also started online schooling to complete his high school education.

Nash Grier and other members of his management have also released mobile games and social media apps including Mobile, Cash Dash, and Challenged. Similarly, he also has his own website where fans can buy his merchandise and also an Aeropostale clothing line called ‘UnitedXXVI’.

As of 2013, Nash had over 12.7 million Vine followers. He has over 4 million subscribers on his YouTube Channel. Because of his immense popularity, he has also appeared on various shows including ‘The View’ and ‘Good Morning America’.

In 2017, he appeared in the Netflix film You Get Me alongside Bella Throne, Halston Sage, Taylor John Smith and  Anna Akana.

He has nearly 5 million subscribers on YouTube, and an average view per day of 40K. YouTuber makes between $2 to $5 per monetized 1000 views. So, he might earn $100 daily.

Grier lives with Cameron Dallas in LA, Vine. Previously, he used to live in North Carolina with his family, on the Westpaces Rd, Mooresville, NC. Similarly, he also gets paid by few several brands to feature their product in his videos.

In 2013, Nash Grier posted a video in Vine in which he said, “Yes, it is! FAG!” in response to an OraQuick at-home oral HIV test ad which stated, “Testing for HIV….It’s not a gay thing”.

He later deleted the video but it faced scrutiny in July 2014. Towleroad stated Nash had a history of ‘making homophobic remarks n social media’.

However, he later posted an apology on Twitter stating that he was “stupid, young, and arrogant and in a bad place. I’ve moved on and learned from my mistakes and I am so truly sorry to anyone I have offended”.

Nash Grier is an unmarried man. Reportedly, he is dating Taylor Giavasis. The couple first met at Paris Fashion Week in 2015. The social media stars look pretty amazing together and their fans just love them as a pair.

Grier loves exploring different places, as he shares his traveling pictures on his Instagram. He is an avid adventure lover and dog lover.

However, both Nash and his alleged girlfriend Taylor have not accepted being in a relationship yet. Prior to Taylor, Nash was rumored to be dating Fellow Vine star Lauren Giraldo and Anastasia Karanikolaou.