Welsh actor Trystan Gravelle gained recognition for his role as Victor Colleano in Mr. Selfridge. Similarly, he is also popular for his work in National Treasure, Gap Year, Beast, A Discovery of Witches, and Quiz.

Trystan Gravelle was born on 4th May 1981 in Llanelli, Carmarthenshire, Wales, the UK under the birth sign Taurus. He is 41 years old as of 2022.

He went to Ysgol Gyfun Y Strade and later enrolled at the Royal Academy of Dramatic Art. Likewise, from 1997 to 1999, Gravelle was a member of the Llanelli Youth Theatre.

Following his graduation from RADA, he attended the Royal Shakespeare Company.

He first appeared as Dave in D.C. Moore's monologue Honest at the Edinburgh Fringe Festival as part of the Assembly program.

In 2011, he made his feature film debut as Christopher Marlowe in Anonymous alongside Rhys Ifans, Vanessa Redgrave, Joely Richardson, and David Thewlis.

Gravelle made his career breakthrough as Victor Colleano in the British period drama series Mr. Selfridge. He starred in the show from 2013 to 2016 as a series regular alongside Jeremy Piven, Amanda Abbington, Ron Cook, and Tom Goodman-Hill. 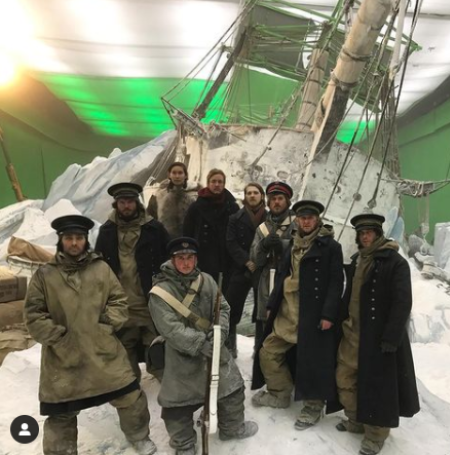 CAPTION: Trystan Gravelle behind the scenes with The Terror co-stars SOURCE: Instagram @christos_lawton

Similarly, in 2018, he joined the cast of Sky One TV series A Discovery of Witches as Baldwin Montclair's opposite co-stars Teresa Palmer, Matthew Goode, and Edward Bluemel.

As of 2020, Trystan played Adrian Pollock in ITV serial Quiz starring Matthew Macfadyen, Sian Clifford, and Mark Bonnar. The show is based on James Graham's play of the same name.

The Terror star has appeared in several films and TV shows since his official acting debut. Most of his earnings come from his successful acting career.

According to various online sources, his net worth is estimated at around $700 thousand as of 2021. Though he has not revealed his exact fortune, he surely makes thousands of dollars for his role in tv series and films.

Is The Quiz Star Married?

The 40-year-old actor is unmarried and reportedly single as of 2022. Similarly, no news of him dating anyone has surfaced on the internet.

The Baptiste star prefers a low-key life and has not been romantically linked with anyone to date. Hopefully, he will let us know more about his love life in the future.