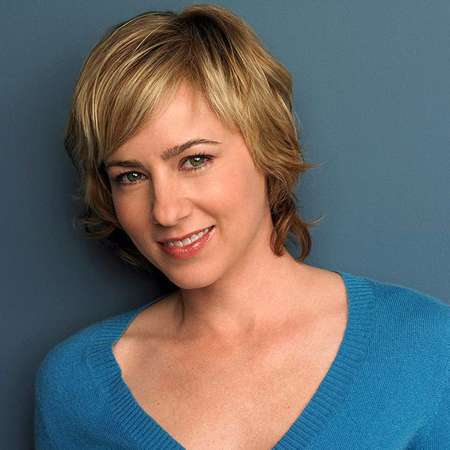 Traylor Howard is an actress of American nationality, known best for her portrayal of Sharon Carter in the television series Two Guys and a Girl. She is also known for her role as Natalie Teeger on the USA Network series Monk. Her other works include Me, Myself and Irene, Son of the Mask, Lois & Clark: The New Adventures of Superman, First Monday, The Division, and Nolan Knows Best (a pilot).

The actress has accumulated a large amount of money from her illustrious acting career.

Howard has been married thrice and has two children from her marriages.

Traylor Howard was born on the 14th of June, 1966, under the birth sign of Gemini. She has been involved in acting since 1994. Her acting skills and success due to this have led the bio and career details about her to be searched by fans and critics all around the world. She was born to parents Peggy and Robert M. Howard.

Howard was born in Orlando, Florida, and was interested in acting from a very small age. To pursue her interest in the field, she first appeared on television in 1994. She appeared first in the television commercials for the AT&T Corporation.

Traylor Howard has appeared on many television series. Her most notable role to date has been her portrayal in Monk. She appeared as the secretary of Adrian Monk in the USA Network series, Monk which led her to critical acclaim and garnered the attention of a lot of fans around the world.

Howard then appeared as Sharon Carter in Two Guys and a Girl. The role she played was that of the title character in the sitcom that lasted from 1998 to 2001 which became one of the plus points of her acting career. Other roles include acting in Lois and Clark, Boston Common, First Monday, The Division, Bra, and Alice, The West Wing, etc.

Howard's other role includes appearing as Kathy in the 1998 film Dirty Work and then as Layla Baileygates on the movie Me Myself and Irene. She has also appeared in the 2005 film Son of the Mask as Tonya Avery.

Traylor Howard's Net Worth And Salary

Traylor Howard has managed an impressive sum of the net worth of $2 million. She has earned a decent amount of salary from her appearances in the movies and TV series.

In the year 2000, Howard was a cast in the movie Me, Myself & Irene which was turned out to be quite a hit at the box office racking up around $149 million against its producing cost of $51 million. In the movie, she played the role along with Jim Carrey, Renée Zellweger, Chris Cooper, and Robert Forster.

The actress has appeared in the movies and TV shows including Nolan Know Best, Monk, Bram and Alice, The Division, First Monday, The West Wing, Two Guys, a Girl, and a Pizza Place, Boston Common, Son of the Mask, Me, Myself & Irene, and Dirty Work.

As far as the personal life of this pretty beauty is concerned, it has been known that Traylor Howard has been married thrice. Cameron Hall was her husband until 1993. The couple was married on February 2, 1991, after a brief affair.

The couple has no children and they parted ways after two years of marriage. She then married next to actor Christian Navarro. The couple tied their knot on April 26, 2003. However, the couple failed to handle their married life and divorce in 2006.

Howard welcomes her first baby, a son Sabu from her second husband on 24th November 2006. After two failed marriages, Howard finally found her man of a dream in Jarel Portman.

Howard isn't active on any social sites but she has several fan pages on Instagram and Twitter where fans posted her personal and professional updates.