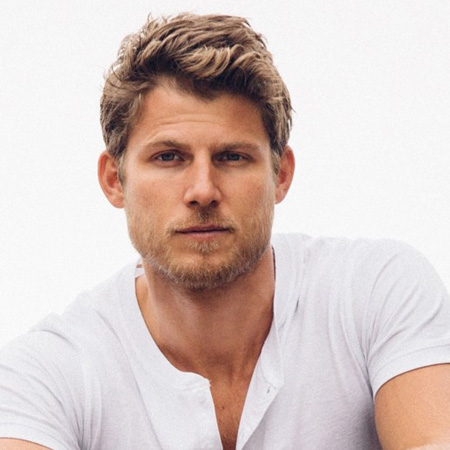 Travis Van Winkle is an American actor. Debuted his career at the age of 22, he later landed a number of significant roles in both television series and films. His notable appearances include That's So Raven, The O.C., Malcolm in the Middle. He is also credited for his work in Rites of Passage, Bloodwork, and Mantervention.

The actor is, as of now, dating his girlfriend Jessica Kemejuk, is an American actress and film producer.

Winkle was born on 4th June 1982 in Victorville, California. He is an American belonging to the mixed ethnicity. He was born to Charles Van Winkle and Sally. His father has Dutch ancestry whereas his mother is of half Irish and half Polish descent.

Winkle stayed in Victorville until he was two and later shifted to Oscoda, Michigan. At the age of eight, his family went to Peachtree City, Georgia. There he completed his graduation from the McIntosh High School.

After finishing his school, Winkle rolled into college but did not graduate. He left the college at the age of twenty to pursue his acting career.

Winkle made his debut appearance in December 2004. He appeared in the episode of Quintuplets. Since then, he has made his appearance in several shows including, The O.C., 7th Heaven, Malcolm in the Middle, and That's So Raven.

Winkle film works include one of the leads in David R. Ellis's film Asylum, Fox's Meet the Spartans, Universal's Accepted, and Transformers. He has also modeled for Abercrombie & Fitch filmed by Bruce Weber.

Winkle also made his appearance as Trent DeMarco in New Line/Paramount's 2009 reboot of Friday the 13th. He has also portrayed in Julianne Hough's 2008 music video for 'That Song in My Head.'

Winkle starred in the suspense thriller film 247°F, with his co-star Scout Taylor-Compton in 2011. The following year, he was cast in the independent comedy Last Call.

From 2011-2012, Winkle made a guest-appearance in television series including 2 Broke Girls, Happy Endings, and Two and a Half Men. In October 2012, he was featured as Lieutenant Daniel Joshua 'Danny' in the TNT action drama called The Last Ship. The series was aired on 22nd June 2014.

In December 2012, Winkle was featured in a recurring role as Johan on the second season of The CW's series Hart of Dixie.

Winkle also portrayed as Coke in the comedy film Mantervention, in 2014. He also had a guest appearance in an episode of Scorpion, where he portrayed Ensign Nathan Hall.

Winkle earns a decent amount of money from his acting career. He has made his appearance in several movies and television series. His movie, Transformers (2007) was a great hit at the box office, as it made the total gross over $709  million worldwide whereas its producing cost was $150 million. In the movie, he shared the screen alongside Shia LaBeouf, Tyrese Gibson, Josh Duhamel, and Anthony Anderson.

Winkle's lifestyle and his earning make his net worth close to millions. He owns LandRover DiscoverySport worth $37,695.

Winkle, 34, is not married yet. He is an active member of Baha'i Faith, a religion. He was rumored to be in an affair with his co-star Marissa Neitling, as both of them have not confirmed about their relationship.

Winkle met Marissa for the first time while filming for The Last Ship. Some of their fans have reported that both were seen frequently for walks, lunches, and shopping together.

Winkle is currently dating Jessica Kemejuk. The couple has frequently shared several pictures together on their Instagram account. As per their social media, the two started dating around March 7, 2016. He has also shared a picture on Instagram with his new girlfriend wishing her birthday on September 11, 2017 with a caption

ransvanwinkle Last year I threw jesser_k a birthday party and had her friends write down well wishes for the upcoming year she was about to embark on. We shoved them into an old Edison bottle and she was instructed to break the bottle and read the letters a year from then, just before her next birthday. Last night we cracked open that son of a B! #SpecialMoment #SpecialLady

It seems the couple is much in a love.