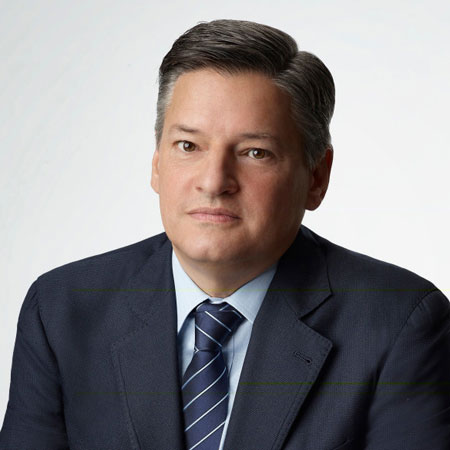 American businessman, Ted Srandos is better known as the chief content officer for Netflix. He expanded the company from a simple rent-by-mail company to a purveyor of original content. Under his leadership, Netflix received 54 Emmy nominations in 2016. In 2017, Srandos honored with Showman of the Year by Variety Magazine.

Ted Srandos was born on July 30, 1964, in Phoenix, Arizona U.S. to Theodore Sarandos Sr. His father was an electrician, and a mother was a housewife. He has three older sisters and a younger brother. Srandos paternal grandfather was originally from the Greek island of Samos who later moved to the United States.

His family name was originally Kiriazakis, but he later changed it to Sarandos. He met and interviewed the actor Ed Asner while writing for his high school newspaper who introduced Srandos to the entertainment industry.

Sarandos graduated from  Glendale Community College in Glendale. Then he attended  Arizona State University, where he was a journalism major until he left the college to manage the video store where he worked since his high school days.

At first, Ted Sarandos worked at Arizona Video Cassettes West chain where he  managed eight retail video stores of the company from 1983 to 1988. Then he became Western Regional Director of Sales and Operations for East Texas Distributors (ETD).

Sarandos worked as Vice President of Product and Merchandising for Video City/West Coast Video until March 2000. He joined Netflix in 2000 after meeting Netflix CEO Reed Hastings in 1999 where he was appointed as  Chief Content Officer.

He played a great role in the success of Netflix as he was responsible for initiating the first round of original programming, House of Cards starring Kevin Spacey. The show was a huge hit which brought $100 million in a March 2011 deal then he created the model where Netflix purchases multiple seasons of shows without any pilot orders.

Ted Sarandos set up a multiple picture deal with Adam Sandler which faced huge criticism and in defense, Sarandos said the numbers make sense. In 2016, Netflix showed over 600 hours of original programming. He recived two The Hollywood Reporter award in 2010 and 2012 in "Digital Power 50". He was also honored with Pioneer Award and Humanitarian Award.

Ted Sarandos is the Executive Committee Appointee member of Academy of Television Arts & Sciences in 2015. He is also the trustee of Exploring The Arts, International Documentary Association. He also served as Film Advisory Board in Los Angeles Greek Film Festival and Tribeca Film Festival.

Sarandos is active in philanthropist activist as well, In 2009 he and his wife Nicole Avant, held a fundraiser for President Barack Obama's 2012 campaign in Southern California where they raised over $700,000 for the Democratic candidate.

Ted Sarandos is one of the richest business tycoons. His salary is $19 million. In 2017, he made compensation package worth $22.4 million which included a $9 million bonus, $12.4 million in stock option awards and a base salary of $1 million.

In 2000, Sarandos joined Netflix as Chief Content Officer and he oversees the company annual budget of over $6 billion.

Ted Sarandos is a married man, he exchanged a vow with former Ambassador to the Bahamas, Nicole Avant in 2009. Producer Lawrence Bender was the first person who introduced Ted and Nicole, and after a few meetings, they eventually fell in love.

The couple first lived in  Avant's hometown of Beverly Hills, California and later shifted to the Hancock Park neighborhood of Los Angeles.  In 2013, the pair bought a beach house in Malibu.

Previously, he married Michelle Sarandos at an intimate ceremony. The duo shared two children, a daughter, Sarah Sarandos and Tony Sarandos. The couple failed to handle their married life and citing some irreconcilable differences, they split apart.

Ted stated him as Catholic. In 2013, he was named as one of the 100 most influential people in the world in the Titans list of Time magazine.