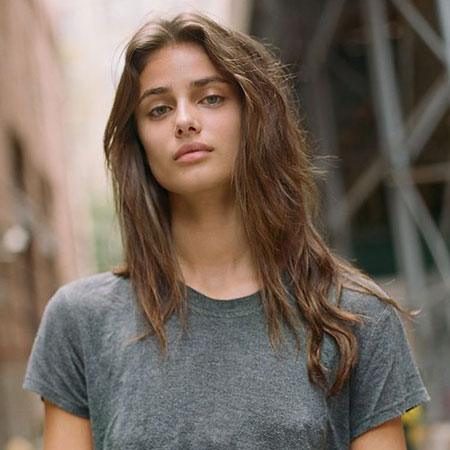 Teenage model Taylor Marie Hill was born on March 5, 1996, in Palatine, Illinois, United States of America. Regarding her ethnicity and nationality, she is mixed Caucasian American model. After some time, her parents moved to Arvada.

There Taylor Hill brought up in a small town in Colorado and raised up with two sisters, Logan and Mackinely, and brother, Chase. She attended at Pomona High School in Arvada, Colorado, where she completed her schooling and graduation.

During Taylor Hill’s high school days, students used to make fun of her skinny legs and that’s why she always hesitated to join modeling. However, she was encouraged and inspired by her family to fly to Los Angeles and appear on her first photo shoot.

Taylor Hill was discovered by a modeling agent, Jim Jordon, and photographer when she was 14 in Granby. After completing her high school, Hill has appeared on the Italian clothing label Intimissimi’s catalog in 2013. She has also been in print campaigns for the American fast fashion retailer Forever 21.

Taylor Hill modeled for H&M in 2014 and walked the ramp for the renowned Victoria’s Secret Fashion Show, which was her stepping stone to becoming one of its famed. The same year, Hill become one of the faces of the brand Rose Cha with several famous models such as Frida Gustavsson, Erin Heatherton, and Barba Palvin.

Taylor Hill won the Model of the Year in August 2015 by her remarkable performances that also drew large crowds and viewership on social media. Apart from her modeling career, she also featured in the movie The Neon Demon that features Elle Fanning, Jena Malone, and Bella Heathcote.

During her school days, Taylor Hill dated Jordon Jack, who later posted their photographer on social media when she became famous throughout the world. However, that was only puppy love according to her.

Currently, Taylor is in a relationship with her boyfriend Michael Shank who is a talent agent and former model. The couple seems happy with each other and is often spotted at various events.

Before getting into modeling, Hill was a gymnast and a physical fitness enthusiast. Other than that she also enjoys snowboarding, music, drawing, and reading in her free time.

Taylor Hill has an estimated net worth of $6 million. Forbes credited her six-figure Victoria’s Secret income for catapulting the 21-years-old’s earning to $4 million in a year and making her No. 17 on Forbes list of the world’s highest-paid models of 2016.