Former leader of the Country/Rock band Sunday Valley, Sturgill Simpson gained fame as a solo artist after the release of his debut album High Top Mountain in 2013. His second album Metamodern Sounds in Country Music was turned out to be a word-of-mouth hit in 2014 and earned a Grammy Awards nomination. Similarly, his third album A Sailor's Guide to Earth was released on Atlantic Records in 2016. The album won Simpson a Grammy Award.

Sturgill Simpson was born on June 8, 1978, in Jackson, Breathitt County, Kentucky, United States. He holds American nationality and belongs to White American ethnicity. His father was a secretary and a Kentucky State Police Trooper. He moved to Versailles due to his father's work and attended the Woodford Country High School. His maternal grandparents were coal miners.

Simpson was not such a talented student as a schoolboy. When he was in seventh grade, his parents got divorced. He started selling drugs and experimented with Lysergic acid diethylamide (LSD) while he was in high school.

During his senior year of high school, Simpson was enlisted in the United States Navy due to this, he couldn't accomplish his graduation. He spent three years in the Navy working in the Combat Information Center. He later moved to Japan and then lived in Everett, Washington, and Seattle. He eventually relocated to his home to Lexington, Kentucky.

Sturgill Simpson was the leader of Sunday Valley, the Country/Rock band formed in 2004. He later took a break from his music career and started working for Union Pacific Railroad in Salt Lake City. He again started working on music after his wife and friends forced and convinced him to make music for a living.

Simpson gained ma s sive fame as a solo artist after his debut album High Top Mountain was released in the year 2013. The album became a worldwide hit. The album also went famous for its similar style to Merle Haggard.

In 2014, Simpson released his second album titled Metamodern Sounds in Country Music which was also a great hit.

Before, Simpson also made his appearances in many TV shows. He made his TV debut with a role on the Late Show with David Letterman in 2014. In fall 2015, he was also cast in Episode 9 of the HBO series The Leftovers' second season where he worked along with Justin Theroux, Amy Brenneman, Christopher Eccleston. 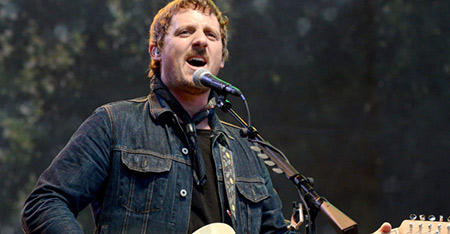 Simpson's third album A Sailor's Guide To Earth came out in April 2016. It debuted at No. 3 on the Billboard 200. The album also won a Grammy Awards for Best Country Album.

On March 7, 2019, it was announced that the singer would perform at the Woodstock 50 music festival in August 2019.

Sturgill Simpson has collected a large amount of money from his illustrious music career. His estimated net worth is around $4 million as of 2019. His primary source of income is his music career which is also supported by his acting career.

Simpson has also a YouTube Channel called SturgillSimpsonMusic which has over 61.6 K subscribers as of 2019. It also plays a vital role to boost his net worth.

Simpson has also been a part of many TV shows from which he has undoubtedly earned a good amount of money.

Sturgill won a Kentucky Colonel at the Kentucky State Capitol on March 20, 2018.

Sturgill Simpson is a married man who tied the knot with Sarah in 2010 in an intimate wedding ceremony. The couple is blessed with three children; sons. The artist is quite secretive regarding his love life who has kept everything about his personal life away from the mainstream.

Simpson said that his spouse has a great influence on his successful music career. In May 2013, the singer spoke to Kentucky.com about his wife where he said:

My wife basically told me, 'You're going to wake up one day and be 40 years old and know that you never really had the chance to properly give this a go'.

Simpson currently resides in Nashville, Tennessee where he relocated in 2010.