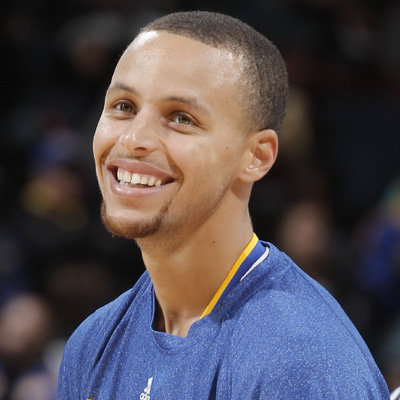 Stephen Curry is one of the most successful NBA players of this era. He plays for the Golden State Warriors of the NBA. He is considered the greatest shooter in NBA history. In 2014-15, Curry won the NBA Most Valuable Player Award and led the Warriors to their first championship since 1975.

Curry is the son of the Hall of fame NBA player Dell Curry and older brother of the Trail Blazers NBA player, Seth Curry.

Stephen Curry began his career as a college basketball player at Davidson College. After playing for three years, he was picked in a draft by Golden State Warriors.

Curry is married to Ayesha Curry since 2011. He shares three children with her.

CAPTION: Stephen Curry with his father during he was kid SOURCE: Pinterest

His younger brother Seth Curry is also an NBA player. He plays for the Portland Trail Blazers. His younger sister Sydel is also a former college volleyball player. She played for the Elon University.

Stephen studied his middle school at Queensway Christian College in Etobicoke, Ontario and then joined Charlotte Christian High School in Charlotte North Carolina. He then attended the Davidson University in 2006 where he played basketball.

Curry led Davidson to win against third-seeded Wisconsin on 28th March 2008. He scored 33 points and Davidson won 73-56 to advance to the Elite 8 for the first time since 1969. He led Davidson to win various games. He was selected by the Golden State Warriors for the  2009 NBA draft.

He was selected by the Golden State Warriors in the first round and became the 7th pick. Curry went on to sign a four year long, $12.7 million contract in July 2009. Curry went on to get his first career triple-double on 10th February 2010 when he recorded 36 points, 13 assists and 10 rebounds.

He extended his five year deal with the club for $201 million in July 2017. He became the first NBA player to sign a supermax contract worth over $200 million. In March 2018, he won over the Atlanta Hawks and he made his 200th 3-point field goal of the season. He also became the first player in NBA history with atleast200 3-pointers in six seasons. Following the match, he suffered a Grade 2 medial collateral ligament (MCL) sprain to his left knee.

He spent six weeks out of the game and came back in Game 2 of the Warriors against Pelicans. In Game 7, Curry recorded 27 points, nine rebounds and 10 assists, as the Warriors earned a fourth straight trip to the NBA finals by winning against Rockets 101-92.

In Game 2 of the NBA Finals, Curry hit a finals-record nine 3 pointers and scored 33 points in a 122-103 over the Cavaliers. Warriors won all four games and became the champion of NBA Finals 2018.

Curry is also a former member of United States national basketball team. His first experience with the national team came at the 2007 FIBA Under-19 World Championship. He helped the team to win the silver medal.

In 2010, he was selected to the senior squad, he played at the 2020 FIBA World Championship (later known as FIBA Basketball World Cup). He led to winning the gold medal in an undefeated tournament. He also participated in the 2014 World Cup and scored 10 points in the final game. That time also he led to won the gold medal for the nation.

In June 2016, Curry withdrew from the national squad for the 2016 Rio Olympics in Brazil. The reports told that his ankle and knee ailments as the major reason behind the decision.

His main sources of income are; NBA salary and several endorsements. He has endorsed several brands including Under Armour, Brita and JPMorgan Chase. He received around $35 million for endorsing those brands.

His wife Ayesha Curry’s estimated net worth is around $16 million. He lived in a lavish home in Alamo California. In 2016, he listed his Walnut home for $3.7 million but later sold in the loss for $2.94 million in August 2017.

Curry has also involved in several charity works. He has been actively engaged to numerous organizations to foundations Nothing But Nets campaign. He also delivered a speech as part of President Barack Obama’s launch of his President’s Malaria initiative strategy for 2015-20.

Further, the basketball player donated his prize Kia Sorento car to the East Oakland Youth Development Center in 2015 and 16.

Not only that, Curry is a two-time gold medalist in 2010 and 2014 as a member of the United States men’s national basketball team and a silver medalist with the Under-19 USA team in 2007.

Curry is a married man. He is married to Ayesha Curry since 2011. The couple shares three children together. Curry married his girlfriend Ayesha Alexander on 30th July 2011 in Charlotte, North Carolina.

CAPTION: Stephen Curry and his wife and their two daughters SOURCE: Heavy

His wife Ayesha Curry is a Canadian-American actress, celebrity cookbook author and TV personality. She hosts her show Ayesha’s Home Kitchen on Food Network. She is appearing on her show since 2016. In 2017, she hosted The Great American Baking Show.

Curry is a firm believer of the Christian faith. He has been spoken about his faith and has said that he has been blessed by his lord for a long time. He also cites his lord is his savior. He has also read the Bible. Curry has a tattoo of First Corinthians 13:8 in Hebrew on his wrist. He is also an investor in Active Faith- a Christian sports apparel brand.