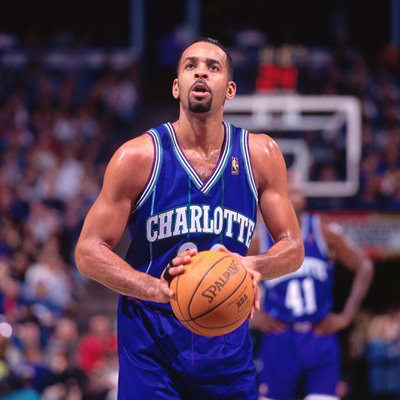 Warden Stephen aka Dell Curry is a former NBA player and current sports commentator. He currently serves as a color commentator on Charlotte Hornets TV alongside Eric Collins and Stephanie Ready. He is the father of NBA stars; Stephen Curry and Seth Curry.

He has appeared in several clubs like Utah Jazz, Charlotte Hornets, and Toronto Raptors. In 2004, he became a Virginia Sports Hall of Fame.

Dell Curry was born on 25th June 1964 in Harrisonburg, Virginia, the United States where he spent most of his childhood days.

Dell attended the Fort Defiance High School located in Fort Defiance, Virginia where he won a state championship in both basketball and baseball.

He then joined Virginia Tech where he became the all-time leader point's score with 1922. He became the McDonald's High School All-American in 1982.

The Texas Rangers drafted him out of High School in the MLB Draft after which Dell began appearing in the 1983 and 1984 NIT Tournaments where he finished 3rd in 1984. His team qualified for the at-large bids to the NCAA Tournament in 1985 and 1986 but lost the first round on both occasions.

He was then selected as the 15th pick by the Utah Jazz in the 1986 NBA Draft. He only played for one season in Utah. Dell then went on to play for Cleveland Cavaliers in 1987. He was selected by one of the NBA's two newest teams for the 1988-89 season, the Charlotte Hornets.

For the Hornets, Dell played ten seasons and then went on to play a season for Milwaukee Bucks. He then played his final season in the NBA for the Toronto Raptors. He finished with 11.7 points, 2.4 rebounds, 1.8 assists on average.

Dell Curry's Net Worth and Charity

He launched his charitable foundation, Dell Curry foundation in 1998. He has supported several charitable works and movements for a long time.

Dell Curry is a married man. He is married to Sonya Adams since 1988. Sonya was a standout basketball and volleyball player who won states championships. She went to Virginia Tech where she met Curry. The couple has 2 sons and a daughter.

Dell Curry's eldest son, Stephen Curry was drafted 7th overall in the 2009 NBA Draft by the Golden State Warriors. His younger son Seth was born in 1990 and his only daughter Sydel was born in 1994.