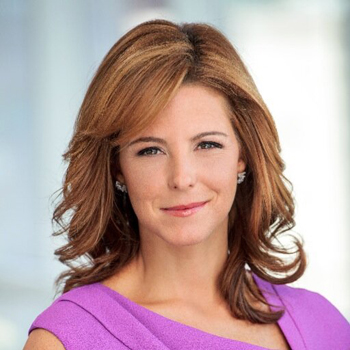 Stephanie Ruhle is an American combat journalist and anchor of MSNBC Network. She has been an NBC correspondent since April 2016 and co-host of MSNBC Live alongside Ali Velshi.  She previously served as a managing editor and news anchor for the Bloomberg News network. As for her personal life, the famous NBC journalist is married and has three children with her husband Andy Hubbard. She resides in Manhattan, New York with her family.

Early Years: Where Did She Go To College?

Ruhle introduced her mother Louise on 6th June 2018, for the Thursday's(7th June) episode of her MSNBC show where she described her mother as one of the "suburban, white women" who voted for Trump in the 2016 presidential election.

She completed her school level from a local school in Park Bridge. Later, she went on to enroll at Lehigh University, Bethlehem, Pennsylvania, from where she graduated with a bachelor's degree in international business in 1997. She also studied in Guatemala, Italy, and Kenya as part of her major subject. Ruhle returned to her old University in 2017 to give the commencement speech.

Career In Journalism: Anchor Of MSNBC Live With Stephanie Ruhle and Velshi & Ruhle

Immediately after graduation in 1997, then 22-year-old started working at Credit Suisse where she spent six years working at the hedge fund sales. Ruhle was then promoted to the post of vice president and also became one of the highest-producing credit derivatives salespersons in the country.

After her tenure in Credit Suisse, Stephanie joined the Deutsche Bank in 2003. She entered the bank as a credit salesperson for covering hedge funds and left after eight years as a managing director of the Global Markets Senior Relationship Management.

She oversaw relationships for the bank’s largest hedge fund clients and clearly impressed on doing so. During this period of time, she founded the Global Market Women’s Network, targeted to help women to get uplifted from the age-old norms of society and move into the leadership roles at the company.

In October 2011, the journalist who joined Bloomberg Television started co-hosting a two-hour early morning program “Inside Track” with co-host Erik Schatzker. A year later, both hosts joined the Market Makers, a late morning program with a duration of two hours.

In April 2012, Ruhle along with the Bloomberg reporters, Bradley Keoun and Mary Childs became the first reporters to break the story of the London Whale, the trader behind the 2012 JPMorgan Chase trading loss.

Reports came out that the London-based trader at JP Morgan Bruno Iksil had collected large positions and had played a significant role in distorting prices in the 10 million dollar credit derivative market.

Another of her famous stint was her provocative response in June 2013 to comment on women in trading by Paul Tudor Jones for the Huffington Post. Many responses from the media and financial industries arose from her response and were hugely talked about in America.

Ruhle is also a columnist for the website Shape.com, which is a branch of the Shape magazine. She has been profiled by the 201 Magazine, IWantHerJob, Business Insider, and Gla s s Hammer as well as on Fit Pregnancy on the April/May edition of the 2013 issue.

In early 2020, it was announced that Stephanie would be bumped up as a senior business correspondent for NBC News.

A feminist and a supporter of women’s rights and empowerment, she founded the Corporate Investment Bank (CIB) Women's Network which works actively for women’s rights. She is also a member of the board of trustees for Girls. Inc. New York and also co-chaired and founded the women on Wall Street (WOWS) steering committee.

A former member of the iMentor Corporate Advisory Board, she is also a member of 100 Women in Hedge Funds, a corporate counsel of The White House Project, and also the Women’s Bond Club.

The White House Project is a not-for-profit organization that works in the advancement of women in aspects related to government, business as well as media. Ruhle also serves on the board and also advises for the React to Film which is an issue-based doc u mentary film series.

What Is Stephanie Ruhle's Net Worth? Earnings And Salary

According to some online sources, Stephanie Ruhle's current net worth is around $5 million. The renowned media personality has racked up the majority of her aforementioned wealth from her years-long career in the journalism field.

Where Does The Multi-Millionaire Ruhle Live?

Ruhle and her husband Hubbard bought a $7.5 million four-story townhouse in the Upper East Side of New York in June 2017. The townhouse features a four-bedroom, 3.5 bathrooms, a living room, a dining room, a great room, and a library.

CAPTION: Stephanie Ruhle previously owned a Condo in Tribeca which she sold in 2015 SOURCE: Business - Insider

The couple previously had an apartment in Tribeca. They sold it in 2015 for $5.2 million.

Stephanie Ruhle is a married woman. She is married to Andy Hubbard. Stephanie and Hubbard met while they were working with Credit Suisse and started dating afterward. The couple decided to get married after a few years of relationship.

Stephanie and her husband Hubbard are blessed with three children; two sons, Harrison Hubbard and Reese Hubbard, and a daughter Drew Hubbard.

It's been reported that the couple has never been part of any rumors regarding divorces. She lives with her husband and children in Manhattan, New York.

Ruhle also involves her in the women's rights movement and she keeps on sharing such moments with her fans on social sites like Instagram and Facebook.

Ruhle is an active social media user who keeps on updating her lifestyle. We can also find her sharing her family photographs, mostly with her children on her Instagram. As of 2021, the media personality has over 169k and 672.1k followers on her Instagram and micro-blogging site Twitter respectively.

Body Measurement And Other Facts