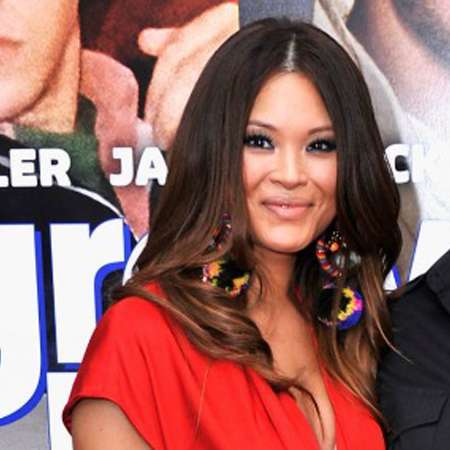 Steffiana De La Cruz is a former Filipino-American model and actress better known as the wife of a famous Hollywood star and comedian, Kevin Jamean. As an actress, she played minor roles in many TV series and Movies including Paul Blart: Mall Cop,  Zookeeper, and Paul Blart: Mall Cop 2.

Steffiana De La Cruz was born on August 28, 1974, in New York City under the zodiac sign Virgo. People who fall under this zodiac sign shows the personality of loyal, analytical, kind, and hardworking.

Steffiana holds an American nationality and was born to a Filipino family. Her family immigrated to America before Steffiana was born.

Steffiana began her career as a model and after sometimes got opportunities to act in small roles.  She first made her appearance on TV in the episode of Das Duell of the German crime drama series ‘Die Gang’, in 1997.

Most of her work as an actress came in minor roles in TV shows and telefilms. She even got a chance to appear on different seasons of The King of Queens which is a CBS series which was very popular at that time.

Besides TV show and telefilms, she also landed in the movies. In 2009, she played the role of a shopper with kids in Paul Blart: Mall Cop. Some of her other movies include Zookeeper (2011) and Stealing Harvard (2002).

Steffiana De La Cruz has the estimated net worth of $5 million. As a model and actress, she earned a decent amount of money.

Talking about her husband Kevin James, he has the net worth of $80 million. Kevin is one of the highest paid actor and comedian and earns about $12 million from films and $3 to $4 million from TV shows.

Steffiana is married to a famous Hollywood actor and comedian Kevin James. They tied the knot on June 19, 2004, at St. Edward Catholic Church in Dana Point, California. Their wedding ceremony was attended their family members and their close friends that includes actor Ray Romano.

The cute couple actually met two years earlier on a blind date at which point their relationship started. James is the younger sibling of famous comedian Gary Valentine.

After their marriage, the couple was blessed with a first child, Sienna-Marie James on September 30, 2005. After a couple of years, the family of three was again blessed by their second child, her name is Shea Joelle James born on June 14, 2007. On April 24, 2011, they gave birth to their third child, his name is Kannon Valentine James.

Steffiana gave birth to her 4th child when she was at the age of 40. Her name is Sistine Sabella James,  born in the late January 2015.

Was Steffiana In A Relationship Prior To Kevin?

Well, the answer is yes, prior to Kevin, she was in a relationship with Chris Penn, who is an actor, director, and producer. However, their relationship couldn’t last for long and they ended their affair after seven years in 1999.

In the video shown below, Steffiana's husband Kevin talks about his Filipino wife, children, and love for Lumpia along with actress Michelle Monaghan.

You May Also Like: Neha Shetty and Emma Heming