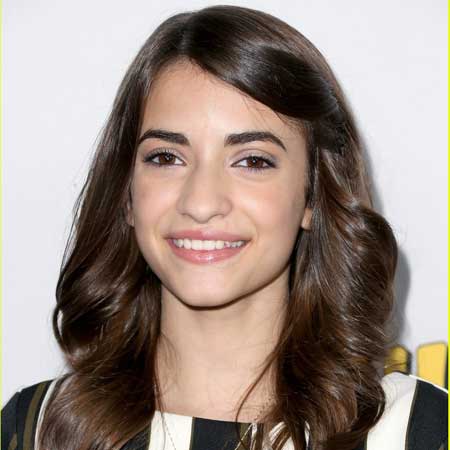 Soni Nicole Bringas is a TV actress and dancer who is famous for her appearance in the TV movie Beautiful and Twisted. She also portrayed a role of Ramona Gibber, on the Netflix series Fuller House. She began her dancing career when she was 5 years old.

She has worked with notable choreographers such as Matt Steffanina, Willdabeast, Nappytabs, Marty Kudelka, Tricia Miranda, and Nick Demoura. She has also worked with the celebrities like Pitbull, Christina Aguilera, Justin Bieber, Missy Elliot, Kimbra, Sharaya.

Soni Nicole Bringas was born on February 2, 2002, in Portland, Oregon, United States of America, under the birth sign Aquarius. Instant Mom star Bringas belongs to the mixed ethnical background. She comes from the Uruguayan, Spanish, and Basque descent.

Soni Nicole Bringas’s mother was migrated from Barcelona, Spain, and her father was from Montevideo, Uruguay. Regarding her nationality, she is an American. During her early age, she wasn’t much interested in dancing even though her mom sent Soni to dance class.

Soni Nicole Bringas eventually developed her passion for dance and has been dancing ever since.

Soni Nicole Bringas began dancing lessons at the age of five. She appeared in major commercials and gigs at quite young age. For her first appearance, she landed the part of a hip-hop dancer in CW series, Jane the Virgin.

As a super talented dancer, Soni Nicole Bringas also performed at the Dancing with the Stars 2014 Finale to promote her movie called Annie. She also has worked with numerous popular stars while acting in several dance videos and commercials.

After performing in a number of reputed places and portraying the role of Ramona Gibbler in the Netflix original series Fuller House along with Candace Cameron Bure, Jodie Sweetin, Andrea Barber, and Scott Weinger, in 2016, Soni Nicole Bringas finally was able to gain more public attention.

Moreover, Soni Nicole Bringas is very much passionate about her dancing career, therefore, she trains for about 10 to 20 hours per week. She has also worked with several famous artists including Justin Bieber, Pitbull, Missy Elliot, Christian Aguilera, and Sharaya as well.

Furthermore, Soni Nicole Bringas has made her appearance in a lot of brands such as the Jordache commercial, American Girl and The Swagger Wagon Toyota commercial.

Bringas's current net worth is not revealed (publicly). However, she earns a hefty amount of money from her dancing/acting career. Her net worth is expected to be around in six figures. She appears in the Netflix original series. Netflix's current worth is $2.7 billion.

Soni Nicole Bringas has garnered a good amount of net worth from her dancing career. She also performed in several reputed places like Dancing with the Stars 2014 Finale and many others. She looks perfect with her height of 5 feet and she has dark brown colored eyes.

Soni Bringas is an unmarried woman. She is not dating anyone currently (at least publicly). She has only devoted to her professional career. She has not much time for dating and getting involved in a relationship who is only engaged with her dancing career.

Celebrated @louis_tomeo 16th birthday last night! Loved meeting some new people and catching up with my friends!! Hope you had fun Louis!