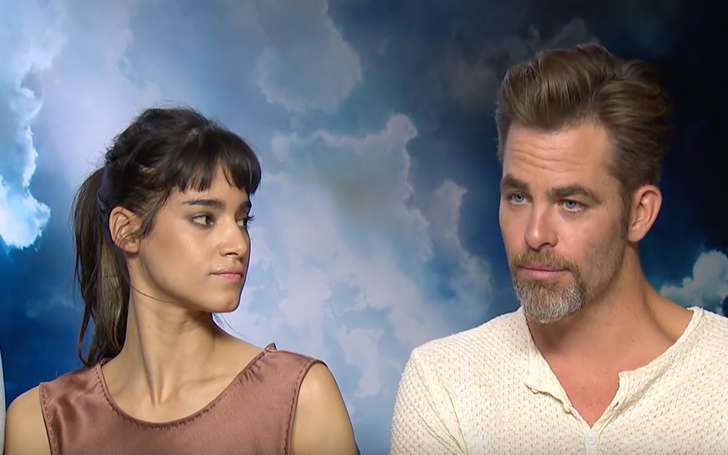 The speculation of a romance between Sofia Boutella and Chris Pine might have driven attention of many fans of Wonder Woman star, Chris Pine. But if you don't know who Sofia Boutella is then let us introduce her first. She recently appeared in the popular movie Wonderwoaman alongside Gal Gadot, Chris Pine, Danny Huston and Connie Nielson.

The upcoming start Boutella is Algerian–French dancer, model, and actress who had secured her position in the Hollywood with her impressive performance in the film The Mummy. Are Sofia Boutella and Chris Pine dating for real? Let's find out.

The rumor of the romance between the Star Trek Beyond's stars Sofia Boutella & Chris Pine started after they were spotted flirting and holding hands at Coachella Valley Music and Arts Festival on 14 April 2017. The couple shared the sets of Star Trek Beyond which provided the platform for their friendship.

Lots of media and social sites have given their views on their affair, however, these all might not be true. Nothing can be claimed about their relationship until the officials speak about it. A reliable site like Entertainment Tonight mentioned they looked very much like a couple, holding hands throughout the evening Coachella Valley Music and Arts Festival.

Not only that, the lovebirds also appeared together at the NYLON Midnight Garden Party later on. The source also confirmed that they appeared in " a double date with newlyweds Troian Bellisario and Patrick Adams."

A source said to ENews "They were super cute." The source also added:

"Chris kept stepping back to let her have the spotlight and wouldn't take photos but kept watching her when she would pose. They were together the entire time and kept walking with his hand around her waist."

But another source said to Entertainment Tonight that  they "are friends but not dating."

The thirty-five years old Sofia Boutella & Chris Pine have been good friends since they started working together in a movie. Boutelle usually shares their pictures via social media.

Being good friends, they have shared a lot of fun time together but we can't pass any comments being based only on some sightings.

Who is Sofia Boutella dating?

The gorgeous French-Algerian diva is currently spending her quality time with her long-term boyfriend, Robert Sheehan. The couple first met on the sets of Jet Trash in India three years ago in 2014 and they fell in love for each other during their

In an interview, Sheehan shared about their relationship and he said that despite they are apart for about five months, it worked.

Sheehan who is romantic boyfriend also went to the set of Mummy to give Boutella surprise which was further heightened when Tom Cruise gave them both a helicopter ride. Let's wish these lovebirds a happy life together.