Sarah Hyland and Dominic Cooper's Emotional Break-up. Are they Dating New People Already? Details About Their Affairs and Relationship 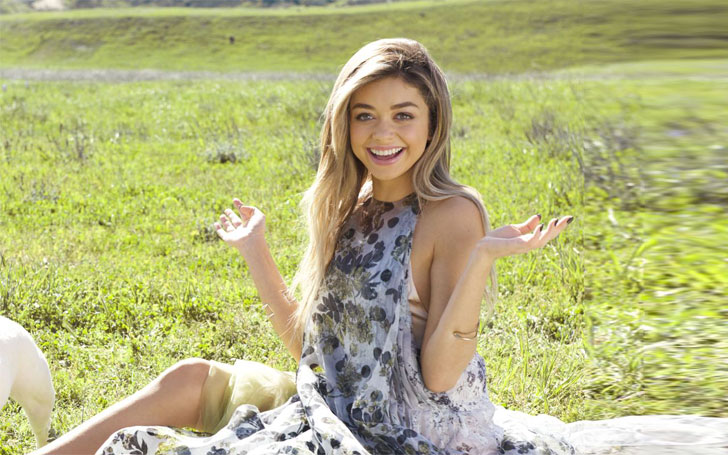 Break-ups and patch-ups in Hollywood are no news. And one of the still hottest break-ups in Hollywood is that of Sarah Hyland and Dominic Sherwood's. Yeah! The two-year-long couple has called it quits.

Modern Family fame star Hyland and Shadowhunters' Sherwood broke up in August, according to most online sources. The break-up saddened many fans around the globe. But, what can you do if the two involved don't want to be together?

Also read: What is 26-years-old actress Sarah Hyland's net worth? Also, know about her movies and career

So, now that Sarah Hyland broke up with Dominic Sherwood, has she started dating already? Or is she single? What do you think?

Is Sarah Hyland single or is she seeing someone already?

Sarah Hyland and Dominic Sherwood were so good together, they looked cute and everyone loved them as a couple. But, for whatever reason, they decided to split up, and it's their call!

It's already been two months since the break-up, do you think Sarah Hyland has moved on? Does Dominic Sherwood have a new girl in his life?

Sarah Hyland is currently dating Wells Adams from The Bachelorette. The duo has been going hot and heavy since their affair public over Halloween, People confirmed.

She went to Jimmy Kimmel's show on 24 January 2018 and revealed her new boyfriend Well Adams. Sarah also shared several pictures of him via her Instagram.

Why did they break up in the first place?

Neither the stars nor their reps have come out with an exact reason for the breakup. The two-year-long romance apparently ended with a mutual and amicable understanding.

Sarah and Dominic are still friends, they started out as friends, so, they are possibly looking for ways to stay good friends even after the breakup.

And unlike in her past, Sarah seems like she doesn't want to rush into a relationship this time. Also, it was a long an serious relationship, so, it's only reasonable that she is taking her time.

Now that we've touched the subject of Sarah Hyland's past affairs, let's shed more light on it.

Sarah Hyland's Past Relationships and Affairs

Number one on the list, we have Matt Prokop, Sarah Hyland dated this American actor for five years once. Unfortunately, they split up in 2014 when Hyland procured a restraining order against Prokop to the allegations that he threatened her with her life and the life of her dog, she also claimed that Prokop physically assaulted her.

Sarah Hyland and Matt Prokop together before their split up

After her breakup with Matt Prokop, Sarah Hyland Dominic Sherwood started dating in the winter of the same year. And the rest is history! Well, literally a history now since they have broken up.

Hyland also had a dating history with Max Ehrich. She dated  Ehrich to Matt Prokop. Enrich and Hyland dated for almost for a year starting from September 2007 to October 2008.

So many men, but alone at the end, Sarah Hyland is taking her time and staying single at the moment. Let's see how long that goes on.