Sam Lloyd was a renowned American actor and singer who is widely known for playing Ted Buckland, a lawyer on the comedy-drama show Scrubs. Regarding his movie's appearance, the actor starred as Neru in the science fiction comedy movie Galaxy Quest. Moreover, Lloyd's other notable television shows and movies are Cougar Town, Shameless, ExTerminators.

Lloyd was the son of Marianna McGuffin and Samuel Lloyd Sr. He has four siblings, Laurel, Robin, Sandra, and Jackson. His uncle Christopher Lloyd is a famous actor as well.

Sam enrolled at Syracuse University in Syracuse, New York, graduating in the 1980s.

Sam starred as Rick in the crime movie Rising Sun in 1993. He had the main role of Barkley in the sitcom television series Double Rush in 1995.

The same year, Lloyd went on to star in the science fiction comedy film Flubber. He acted as Neru in the comedy sci-fi film Galaxy Quest in 1999.

He landed his guest role in the television sitcom Two Guys and a Girl that same year. From 2001-2009, he portrayed Ted Buckland in the medical comedy-drama show Scrubs alongside Zach Braff, Sarah Chalke, and Neil Flynn.

His other successful television series and movies include The Nightmare Room, Numb3rs, Scorcher, and The Mudge Boy. In 2015, he had a guest role of Buddy Diamond in the comedy-drama Shameless.

He also starred in an episode of the sitcom television series American Housewife as Sam Marks in 2019.

Sam Lloyd had an estimated net worth of $600 thousand at the time of his death. He ama s sed a significant amount of fortune from his professional acting career.

Lloyd had worked in the 1997 science-fiction comedy film Flubber, which surpa s sed over $178 million at the box office worldwide against the budget of $80 million.

Lloyd was married to his long time girlfriend, Vanessa Lloyd. But, there is no information when the duo exactly got married to each other. 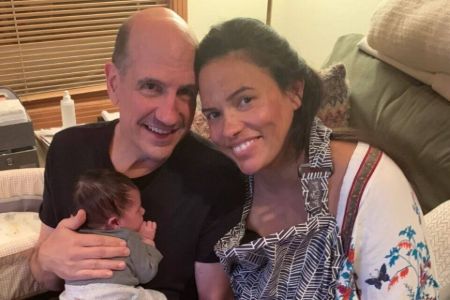 Sam Lloyd with his wife and son SOURCE: Universal News

Sam Lloyd was diagnosed with a brain tumor in January 2019. Later on, it was disclosed to be metastatic lung cancer, which had damaged his liver, spine, as well as jaw.