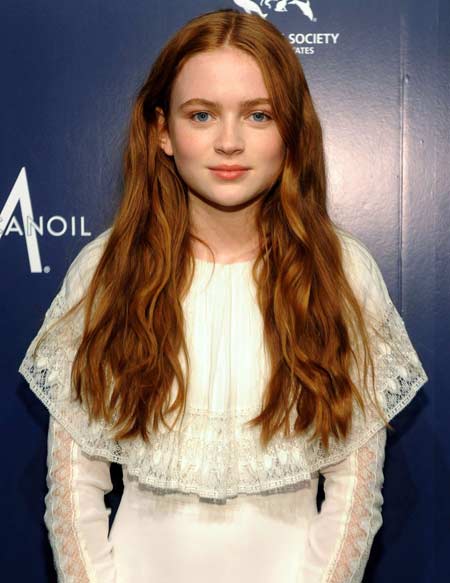 American rising actress, Sadie Sink is popularly known for portraying the role of Maxine ''Max'' Mayfield in the Netflix's web series, Stranger Things. Her performance in the series won her the nomination for Screen Actors Guild Awards. Before appearing in screen she used to perform in Broadways.

Sadie Sink was born on 16th April 2002 in Brenham, Texas under the birth sign Aries. She grew up along with her siblings, three older brothers Mitchell Sink, Spencer Sink & Caleb Sink and a younger sister Jacey Sink. Her father is a football coach and her mother is a math teacher.

As a kid, Sink along with her brother, Mitchell used to recreate Disney's High School Musical. Due to her obsession, her mother sent her to the acting cla s ses in a community theater. She also took dancing cla s ses and vocal training cla s ses.

Sink made her acting debut in Broadway. After giving an audition, she earned a role in Annie in 2012.

Sadie Sink made her Hollywood debut in 2013 as Lana in an episode of FX TV's series, The Americans. In 2015, Sink portrayed the character Suzanne Ballard, daughter of Ron and Odelle Ballard. The series starred Anna Friel, Peter Facinelli, Jack Robinson and Treat Williams.

Sink's breakthrough came in 2017 in Netflix's science fiction horror web series, Stranger Things. While auditioning for the series, she was a s signed to act a fake scene. She stated,

''They gave me two scenes, one of them was with the leads, and one where me and my brother are in the car about to run over the kids and I'm screaming at him. So I had to do that one, and then I had to read a fake scene. It was still my character, and I was talking to Lucas—but his name was different because they had to disguise it. It was a big scene, but it wasn't in the episode.''

Her character, Maxine ''Max'' Mayfield, was introduced only in the second season. Her character is the tomboy stepsister of Billy. She earned huge fame after appearing on the series. In the upcoming season of the series, she will be one of the significant characters.

Incredible night with my best friends I am so proud of everyone. This was a very special first Golden Globes to attend. It was an honor to be able to celebrate the #TimesUp movement and how important it is for my generation. Everyone needs to know that it’s okay to embrace all of yourself. To be smart, brave, and strong. To have fun, to inspire, to lead, and to follow. As long as you are finding out who you are and being true to yourself. Everyone has a voice and a message that deserves to be heard. If we stick by this and learn to spread love and be accepting of others, then we truly can make a change. Like Oprah said, “A new day is on the horizon!”

The series starred Finn Wolfhard, Millie Bobby Brown, Gaten Matarazzo, Natalia Dyer, and Charlie Heaton. Her performance was nominated for Screen Actors Guild Awards in 2018 in a category of Outstanding Performance by an Ensemble in a drama series.

Sadin Sink has an estimated six-figure net worth, however, the amount is still under review. Sink makes money from her acting career.

As per some online sources, Sink earned $23k per episode from the Netflix's series, Stranger Things. Her salary will increase up to $25k per episode in the coming season.

The talented and young actress, Sadin Sink, is single in the present days. Sink is ambitious and hardworking and aims to be one of the best actors in Hollywood.

Sink is close to the cast of Stranger Things, Millie Bobby Brown. Here is what she had to say about her relationship with Brown,

''Even though we didn't have many scenes together, we'd still see each other at on-set school. And we'd make sure to have sleepovers, we'd always hang out outside of school since we never really got a lot of time together on set.''

Her Instagram account suggests that she loves traveling, singing and enjoys spending time with her friends and family.

She is active in social media and has an impressive fan following. As of 2018, she has over 4 million followers on her Instagram account.

Here are 11 facts about Sadin Sink: