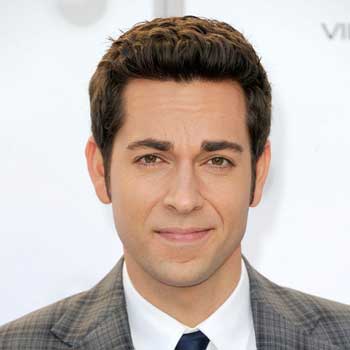 Zachary Levi Pugh popular as Zachary Levi is an American actor, director, and singer, best known for his role as Chuck Bartowski in the series of the same name, that was aired from 2007-2012. He made his career debut in the FX television movie called Big Shot: Confessions of a Campus Rookie in the year 2002 as Adam.

Zachary Levi is the second child of his parents Susan and Darrell Pugh. He has one older and one younger sister siblings. He was born in the year 1980 September 29 at Lake Charles, Louisiana, United States. Zachary is of America and belongs to Welsh ethnicity.

Zachary began acting on stage when he was six years of age. After he graduated from Buena High School, he went to pursue his dream in LA. He performed the lead roles in regional productions like Grease, The Outsiders, Oklahoma! , Oliver!, The Wizard of Oz and Big River at Ojai Art Centre.

He moved with his family across several states in his chidhood days before finally heading back to their home in Ventura, California, where he attended Buena High School for four years.

Zachary Levi made his career debut appearing in the FX TV movie Big Shot: Confessions of a Campus Bookie. He also portrayed Kipp Steadman on the ABC sitcom Less than Perfect that aired from 2002-2006.

He was featured as Grant Asher, a potential boyfriend of Charisma Carpenter's character in the ABC Family TV movie See Jane Date. The same year, he was the cast in the television series called Less Than Perfect as the main cast in the role of Kipp Steadman appearing in 81 episodes that were aired from 2002-2006.

Zachary has played in several of the television movie and series. Amongst them to name some of the important ones that highlighted his name and career are Alvin and the Chipmunks: The Squeakquel, Tangled and Thor: The Dark World.

He was awarded Kid’s Choice Awards for the movie Alvin and the Chipmunks: The Squeakquel where he appeared in the lead role of Chipmunks’ uncle Toby Seville. Zachary Levi made his Broadway debut in the year 2013 from the musical comedy First Date.

Zachary Levi debuted his singing career from the song called Terrified. He is recognized easily as a singer from the songs titled “I see the Light” and “I’ve Got a Dream” with Mandy Moore which was featured in the moviTangleded.

Zachary Levi's Net Worth And Salary

Zachary Levi's net worth is $8 million at present. He earned a decent amount of salary from his career. His salary per episode from the TV series, Chuck was $60 thousand.

He owns a 2009 Nissan GT-R and two motorbikes, Harley-Davidson FXDX and a Ducati Monster 750CC. He is an avid gamer. He is excellent at poker as well. He loves action. In 2010, he started his own company name The Nerd Machine.

Talking more on his personal life, he had dated singer and actress Caitlin Crosby. She had been his girlfriend from January 2008- January 2010. Before that, he might have been dating but there is no information available on his affairs before Caitlin.

He now is a married man. He got married to Missy Peregrym recently in 2014. This stops the questions and gossips about his sexuality if he is a gay. He is a Christian by faith and strong believer of Christ where he had talked openly about his faith on him while interviewed in 2002 by the Relevant Magazine. Zachary fancies sport car and motorcycle.

Zachary is one of the TV’s sexiest men ranked by BuddyTV in 2011. Zachary is very handsome having the muscular physique.  He had showed off his toned body being shirtless at the beach of Hawaii recently in June 12 which has grabbed the attention of many of the celebrity reporters and his fans.

There are lots of his pictures on the internet he looks ravishing in the black suit, hot in shirtless and with tees and other outfits. Wiki is the major source of information on him. His fans can follow him @ZacharyLevi on Twitter.