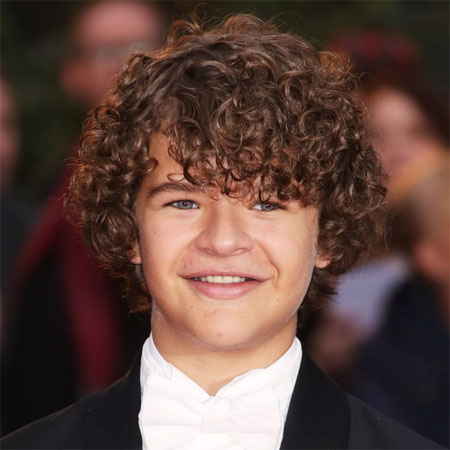 American actor Gaten Matarazzo is best known for portraying Dustin Henderson in an American science fiction-horror series, ‘Stranger Things.’ He started his career as Benjamin on the Broadway stage.

Gaten Matarazzo was born on 8th September 2002 in New Jersey, USA. He belongs to the White-American ethnicity/race and holds American nationality.

Matarazzo is born to Heather Matarazzo and Gaten Matarazzo Sr. His mother has been supportive of her children and made an effort to encourage them to pursue an art career.

Matarazzo has two siblings, Sabrina Matarazzo and Carmen Matarazzo. Their siblings are also models who have acted in television commercials. During his school days, he regularly traveled between New Jersey and New York City for his Broadway performances.

Gaten Matarazzo began his career doing Broadway performances. In 2011, he appeared as Benjamin on the Broadway stage in Priscilla, Queen of the Desert. He also appeared as Gavroche in  Les Misérables. The following year he was cast in an episode of the crime thriller TV series, ‘The Finn.’

In 2016, Matarazzo portrayed Dustin Henderson in the American science fiction-horror series, ‘Stranger Things.’ He starred alongside Winona Ryder and Millie Bobby Brown. It has also been confirmed that Matarazzo will be part of season two of the series.

In 2017, The 5ft 5 inches actor won Screen Actors Guild Awards for Outstanding Performance by an Ensemble and Shorty Awards for Best Actor for his performances in the drama series Stranger Things.

Matarazzo is also part of the upcoming production of Erahm Christopher’s ‘Zach’s Lie,’ which will be released in 2018.

Gaten Matarazzo is currently 20 years old. He attains all his focus on his career. He cites his sister, Sabrina, a singer and actress, as an inspiration to enter the musical theatre.

Besides, Matarazzo has a rare genetic disorder, cleidocranial dysostosis, a trait he has shown with his character in Stranger Things. The condition has affected the overall face, skull & teeth development.

Matarazzo believes that sharing his knowledge and experience about the disease will help build awareness and confidence among people. He has used his platform to raise awareness and fundraise for an organization, CCD Smiles.

Furthermore, The famous young actor shares a lovely relationship with Lizzy Yu. They have been sharing their relationship for four years and are not shy to showcase it sharing to the social media handle of both.

The famous celebrity personality loves to interact with his fans through the social media platform digitally. He stays active primarily on his Instagram handle with the [email protected] having 18.6 million followers.

Gaten Matarazzo is an American actor who has a net worth of $5 million. According to some online sources, ‘Stranger Things’ actor Matarazzo was paid $20,000 at the start of the season.

The television series has successfully landed its third season. Due to the show's popularity, he is getting $250,000 per episode starring for the show.

In 2022, the stranger things actor appeared in The Tonight Show, Starring Jimmy Fallon. The video has been successful in gaining massive views on Youtube, crossing over 2 million views

Be there with us: ArticleBio