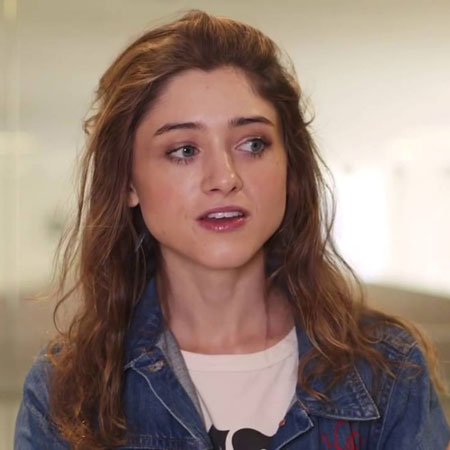 Born in Nashville, Tennessee, U.S., Natalia Dyer is an actress who is noticeable for her performance in the science fiction-horror web television series, Stranger Things.

The young talent made her career debut at the age of 12 from movie Hannah Montana: The Movie in 2009 starring Miley Cyrus. As of 2018, she's working on her upcoming projects: Tuscaloosa, Mountain Rest and After Her.

Born on 13 January 1997, Natalia Dyer is a native of Nashville, Tennessee, U.S. She has American nationality and is of White-American ethnicity.

During her childhood, Dyer was diagnosed with Attention Deficit Hyperactivity Disorder (ADHD) which is a mental disorder of the neurodevelopmental type.

Dyer is a student at the Gallatin School of Individualized Study. She also attended the New York University (NYU). She made acting debut at a young age of 12 from the movie Hannah Montana: The Movie starring Miley Cyrus in 2009.

Natalia Dyer landed her first major role in the film The Greening of Whitney Brown in 2011 alongside Brooke Shields, Kris Kristofferson, Aidan Quinn, and Sammi Hanratty. She then performed in several other movies including Blue Like Jazz, The City at Night, I Believe in Unicorns, and Long Nights Short Mornings.

In 2016, Dyer rose to stardom after her appearance as Nacy Wheeler in the Netflix's horror drama series Stranger Things. She has appeared in the series alongside Winona Ryder, Millie Bobby Brown, Finn Wolfhard, David Harbour, Caleb McLaughlin, Gaten Matarazzo, and Charlie Heaton since 2016.

She received a nomination for 2017 Young Artist Awards for Best Performance in a Digital TV Series or Film—Teen Actress and won 2017 Screen Actors Guild Awards Outstanding Performance by an Ensemble in a Drama Series for the series.

Dyer's upcoming projects are Tuscaloosa, Mountain Rest and After Her.

Natalia Dyer's estimated net worth is $2 million. She accumulated most part of her income from her acting career. Her debut movie Hannah Montana: The Movie made $169.2 million, and Blue Like Jazz made $595,018 at the Box office.

The list of the IMDB rating of her movies and series:

Natalia Dyer is dating her Stranger Things on-screen interest, Charlie Heaton. They were first romantically linked in early 2017 after they were spotted together at the SAG Awards.

Reportedly, Dyer and Heaton also together traveled to Spain in September 2016. They made their first red carpet appearance in 2017 Fashion Awards in London.

Dyer also has a dog, Ozzy. She is a food person and loves chocolate and ice cream.