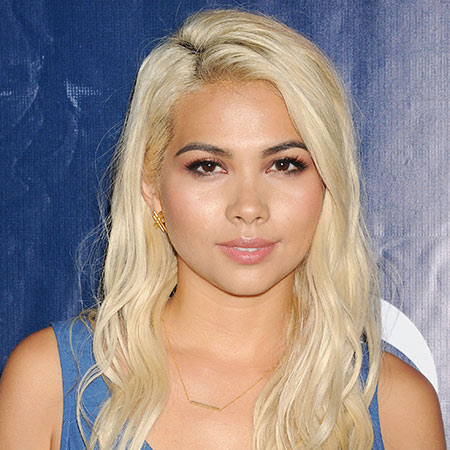 Hayley Kiyoko is an American actress, singer, as well as songwriter who is best known for portraying Velma Dinkey in Scooby-Doo! The Mystery Begins. She also featured in the thriller movie Insidious: Chapter 3. Besides, Hayley had a guest character on the TV series The Fosters.

Hayley Kiyoko was born on April 3, 1991, in Los Angeles, California, United States. She belongs to American nationality and regarding her ethnicity, she has mixed ethnicity.

She is the daughter of actor and comedian Jamie Alcroft and figures skater, Sarah Kawahara. She has one sister named Alyssa Alcroft.

Haley Kiyoko was insisted on taking drum lessons when she was 6 and at the age of 11, she started to write drum charts for new releases. She also used to sell them. Besides, Haley was discovered at the age of 5 when she was spotted with her friend for a photo shoot.

Hayley joined the all-girl singing and dancing group, The Stunners which later signed with Columbia Records. They released a single, Bubblegum to iTunes and also sang for iCarly soundtrack. In 2009, the group left the Columbia Records.

Hayley Kiyoko’s talent ship and other usual activities in her school led to elect as a President of her middle school and high school. After accomplishing her schooling in 2009, she moved at Clive Davis School of Recorded Music, New Jersey University but dropped out due to her acting career.

In 2009, after graduating her high school, Hayley Kiyoko had her first big role in a hugely successful TV movie, Scooby-Doo! The Mystery Begins as Velma Dinkley. She reprised her role in its sequel, Scooby-Doo! Curse of the Lake Monster in 2010. Hayley has performed in Disney’s Wizards of Waverly Place.

Hayley Kiyoko is an unmarried woman. She might be bisexual which is even being said that Hayley has openly dated boyfriends and girlfriends.

Interestingly, Hayley is rumored to have hooked up with American actor Nick Palatas. However, this rumor has not been confirmed yet. Her sexuality was first suspected while she released her new single Girls Like Girls.

Hayley Kiyoko appeared in CSI: Cyber as a Raven Ramirez in 2015 and as the lead role on the spin-off web series of The Fosters, directed the video for her song with a message ‘Girls like girls, just like boys do. However, it looks, in her practice at spreading LGBT positive clue to her fans.

The insider source also informed that they had some uncertainty regarding her sexuality. They claimed: “I think that Hayley might either be a lesbian or a bisexual. She has openly advocated LGBT rights in her new song and video, Girls Like Girls.”

They further added:  “I am 75% sure that she is actually gay but is closeted, which is why she dates boys. But secretly, she loves girls. Or she might even be attracted to both the sexes. Who knows? She might be bisexual as well.”

It means how someone can say someone lesbian without any official proof.  Currently, she is single. In addition to her acting, She also loves hiking, ice skating, teaching dance, and taking karate as well.

Hayley Kiyoko has earned a handsome money of net worth and salary from her acting career as well as singing which is appraised to be $600 thousand.

She stands at the height of 5 feet 4 inches and her weight is 54 kg. She has a very attractive body with her body measurement of 32-24-34 inches.