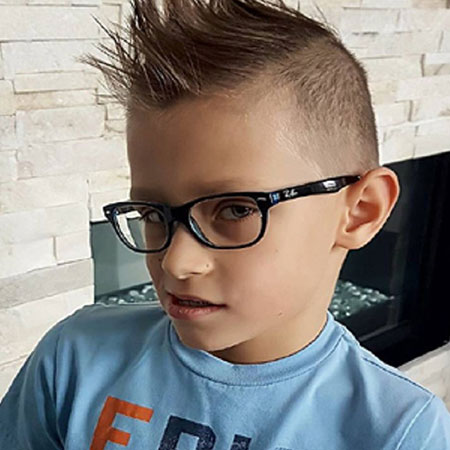 RonaldOMG is a Canadian YouTuber and gamer who have more than 2 million subscribers on his YouTube channel. He mostly uploads his gameplay of Roblox and Minecraft and recently he has started uploading Fortnite. His father and elder sister also have their own YouTube channel and upload gameplay videos.

Early Life And Education Of RonaldOMG

RonaldOMG was born Ronald Calor to Polish parents on September 3, 2008, in Canada under the zodiac sign of Virgo. He is Canadian as per his nationality and belongs to the Caucasian ethnicity. He has an older sister Karina Calor, who is also a YouTube gamer like him and has her own channel and known by her YouTube name GamerGirl.

His father is also a popular gamer of 'Roblox' who goes by the name of FreddyGoesBoom and even owns his own YouTube channel titled Freddy.

RonaldOMG's educational background has not been revealed yet, however, according to some sources, he is attending a local school in Canada.

RonaldOMG loved playing a video game since his early days. After sometimes. he moved into social media when he joined the gaming platform 'Roblox', and in 2016, he created his YouTube channel. Then, he started uploading his 'Roblox' gameplay videos and even goes live on YouTube.

The first video he uploaded was of Minecraft: BLOODIEST NIGHT which was a gameplay tutorial on survival mode. That video was his first achievement where he soon grabbed the attention of many Minecraft players and became a gaming star. The most viewed videos of his channel are of Murder Roblox series, How to Escape the Giant Fat Guy Obby ?!?, CREEPY PERSON, Escape From the Office Obby, and My Final House.

Here is the video of RonaldOMG playing Fortnite

RonaldOMG started gaining more popularity after he started uploading Minecraft content on his channel. As of 2018, he has more than 2 million subscribers in his YouTube channel RonaldOMG. In recent days, he and his sister Karina (GamerGirl) started working together for a separate YouTube channel SIS vs BRO on which the brother-sister duo also post entertaining videos including channel hosts vlogs, travel diaries and Q&A videos.

RonaldOMG along with his sister Karina have earned silver and gold buttons from YouTube. In 2018, RonaldOMG started to upload his gameplay skills of a famous game Fortnite.

RonaldOMG frequently posts his game playing videos on his YouTube channel. As per the sources, a YouTuber gets $100 per 1000 views. One of his YouTube videos has over 9.4 million views as of 2018, from which we can speculate he has earned a handsome amount of money.

Ronald is currently single and he is still too young to have a girlfriend. He is busy building his career and rising to the top. Ronald is very picky when it comes to food, he loves macaroni and cheese, popcorn, and caramel ice-cream.

His favorite game is Fortnite which is a battle royal game. Ronald's favorite YouTuber is Preston Blaine Arsement who has a channel named PrestonPlayz. Roland has gone to many countries with his family and he is wishing to make a trip to Dubai. In his free time, he loves playing guitar and reading books.

OMG, I found more FAKE accounts, guys unfollow those as they are IMPERSONATING me and Karina! Fakes are @ronaldtheyoutuber @karina_ronald_youtuber , the real accounts are the ones I follow