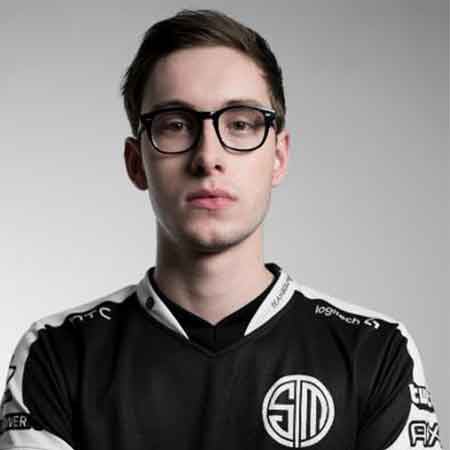 Soren Bjerg well known by his game name Bjergsen ranks second in the Danish League of Legends. He plays the role of a Mid Laner for Team SoloMid of the North American League of Legends Championship Series. The games he used to play include Counter-Strike Global Offensive, Hearthstone, World of Warcraft.

Bjergsen was born Søren Bjerg on February 21, 1996, in Holstebro, Denmark. He grew up along with his two brothers in Denmark.

He was quite a bright student but hated going to school as he was often bullied. From his young age, he was interested in playing the video games.

I was a goofy kid

Bjergsen began his professional League of Legends (LOL) career from a very early age when he was only 16 years old. In 2013 he joined LOL as a member of Copenhagen Wolves in the European League of Legends Championship Series (LCS).

He played with Copenhagen Wolves (CW) after week 3 due to age restrictions put in by Riot Games. On 21st February after turning 17, he officially rejoined the main lineup and played the remaining games.

Thank you to all the fans that cheered us on and baylieved! Happy that we won Rift Rivals but in the grand scheme of things this is just the beginning. We still need to win NALCS and show up at worlds!

After a successful run with the CW, his team rebranded as Ninjas in Pyjamas (NiP) for the Summer LCS. In early November of the same year, Bjergsen left NiP and joined Team SoloMid as he moved to North America. There he played as their mid laner.

Bjergsen violated the LCS rules by inspiring LCS player to resign his position at Lemondogs and was fined $2000 by the Riot Games on 23 January 2014.

In 2015, he participated in numerous events and got first placing in IEM Season IX – World Championship Katowice as well as 2015 NA LCS Spring Playoffs.

During 2015 he won the Most Valuable Player Award in North American LCS Spring Split. In 2016 he was the winner of the season NA LCS Summer Playoffs again and NA LCS Spring Regular Season of 2017.

Bjergsen earns a considerable pay packet for his efforts. Bjergsen's net worth is unknown, but according to reliable sources, it is estimated to be in six-figures. Here is a list of all his winnings along with the prize money.

The prize money he earned until now is $120,811.30. Along with being a gamer, he is also a YouTuber. Through his YouTube channel, he also earns a good amount adding more to his net worth.

Bjergsen has given all his time to gaming which has earned him the second position in the Danish League of Legends.  Rather than being involved in any affairs and relationship, he gives time to gaming. As of now, he is living in the Los Angeles at the Solo Mid gaming house.  He is possibly single at present.

He is active on Twitter as well as on YouTube Channel. He posted his astonishing video of games on his YouTube channel. His style of playing is highly appreciated by the followers of the channel.

Bjergsen is a well- known face in the world of LOL and has more than 1.3 million followers on Twitter and 347K followers on Instagram. His favorite food is Lasagna and he has a dog named Ozzy.

Here is one of his interviews.