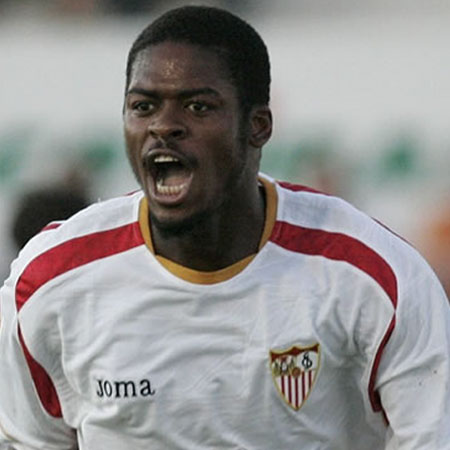 Koffi Christian N’dri is best known as Romaric is a Professional footballer who is currently playing for SC Bastia in Ligue 1. Romaric is a versatile midfielder who also plays as a defensive or central midfielder. He was born on 4th June 1983 in Abidjan. He is from the Nation Ivory Coast.

Romaric began his career with the popular youth academy of his local club ASEC Mimosas. He moved to K.S.K Beveren in 2003. He scored his career best 13 goals in 32 matches in his second season in Belgium. Romaric joined French club le Mans UC72 on May of 2005. But to the sheer disappointment he got into a serious car accident and fractured his collarbone close to Liege in Belgium. However, he recovered from the accident injuries quite quickly and established himself among the Le Mans starting eleven. In the 2006-07 seasons he scored 5 goals in total 35 matches helping Le Mans retain its Ligue 1 position (12th). Romaric was signed by Sevilla FC in Spain on 21 May 2008. The contract was made for four years and the fee was supposedly around 8 and 10 million Euros. H e scored in 4-3 win against real Madrid in La Liga on 7 December and that was his first La Liga goal for Sevilla FC. In the 2011-12 season he was loaned to Espanyol where he scored three times in the 28 appearances he made. 2012-2013 he was in Zaragoza where he made 12 appearances and scored no goals. He has been in SC Bastia since 2013 where in 29 appearances he made, he has scored 4 times.

His first international goal was made on 29 March 2009 against Malawi for the 2010 World Cup qualifiers. The match was a 5-0 win. He played for the Elephants in 2006 Africa Cup of Nations, the tournament ended for his team with a final loss to Egypt. He also played for the side in 2013 Africa Cup of the Nations.

About Romaric’s marriage affairs or any romantic link, nothing is public. It is due to privacy matters many footballers choose to keep their romantic life out of public eye. He is a well built black race player with a height of 1.87 m and weight of 88 kg.

Romaric  when in team Sevilla FC helped the team win Copa del rey in 2009-10 season and while in the team, his team was runner up of 210 Spuercopa Espana. He was in the runner up squad of 2006 Africa cup of Nations. Romaric’s annual Salary is not revealed. His market value is worth 1,500,000 Euros. He wears No.6 jersey in his current team  SC Bastia.   He is definitely a player with bright future in coming days if the same level of quality is maintained.