Cole Sprouse and his on-screen love interest Lili Reinhart seem to have finally confirmed their romance rumor as the duo flash their affection via PDA in Paris.

While strolling the City of Love, the lovebirds were captured kissing and holding hands in multiple places including restaurants and street side. This is their first PDA after their vacation together in Hawaii early this year. 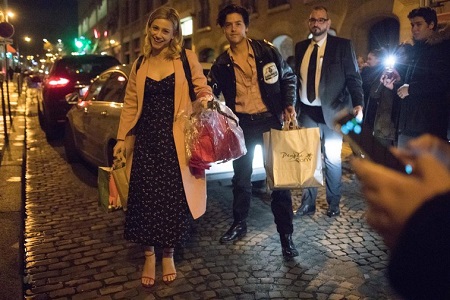 The low-key couple hasn't shared anything about each other on their social media. The 21-year-old actress, however, tweeted on 1st April to thanks their fans for their support.

Thank you so much to everyone who came to #Rivercon I am so fortunate to have met all of you. It truly was an experience I won’t soon forget. Thank you. I love you. pic.twitter.com/Eh6c5ytcKG

None of them have come open and confirmed their relationship. Last year, Sprouse said in an interview with ELLE:

"I am one of those guys that's never ever going to talk about my private life with the public sphere. I mean people can talk about the Jughead as much as they want but when it comes to the personal relationships, I have spent much of my life separating work and play so I will continue to do so."

Their romance rumor first sparked last March after the-25-year-old Amercian actor shared a picture of  Reinhart on his Instagram.

The rumor swirl more rapidly after the pair was spotted kissing and canoodling at a Comic-Con party.