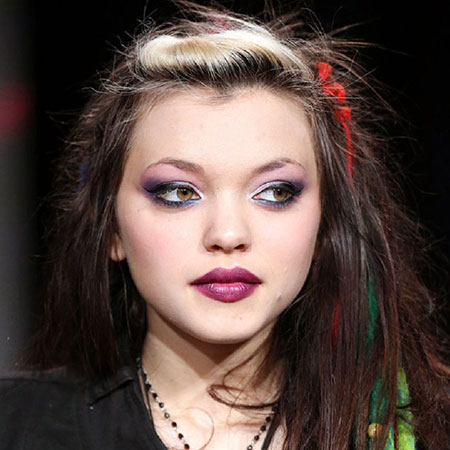 Rena Lovelis is an American singer and ba s sist of Cherri Bomb, which it is rebranded to Hey Violet. They created a band with Julia Pierce, Rena Lovelis, Nia Lovelis, and Miranda Miller when they were still in middle school. Till now her band has released about 24 songs.

Rena Lovelis was born Pyrena Lucrezia Morze Enea on April 6, 1998, in New York, the United States under the zodiac sign of Aries. She was born to mother Ana Lovelis, a musician and actress and father Stacy Morze, a touring keyboard technician and studio builder.

Rena holds an American nationality and belongs to mixed ethnicity. Her parents have German, Italian, Polish, and Russian descent. She has a sister Szatania Angelika Morze Enea aka Nia. She grew up with her sister in the Orange town in New York.

She grew up in a musical, artistic environment which developed a deep love in her for music. When she was small she learned to play ba s s guitar and planned for becoming a professional musician.

In 2008, Julia Pierce her friends Rena Lovelis, Nia Lovelis, and Miranda Miller form the hard rock group, Cherri Bomb when they were still in middle school. Julia was lead singer and guitarist in the band where Rena was the ba s sist and back vocal. Nia was the drummer, and Miranda was at rhythm guitar, keyboard, and backup vocals.

They named their band taking a reference from the self-help book by American music and entertainment journalist and author Carrie Borzillo. On June 14, 2011, they first made a lucrative contract with Hollywood Records. On October 18, 2011, they released their first EP Stark. After their first EP, they soon became popular among the crowd.

They also got an opportunity to perform their songs at several European music festivals including at the Oxygen Festival in Ireland where they were the youngest group to perform. On May 15, 2012, Cherri Bomb released their first studio album This Is The End of Control which reached #24 on the Billboard's Top Hard Rock Albums chart and #11 on the Top Heatseekers Chart.

What Happened To Cherri Bomb After Julia Pierce Left The Band?

In January 2013, singer Julia left the band and Cherri Bomb and after her departure from the band, they renamed it as Hey Violet. Julia Casey Moreta replaced Julia Pierce as a guitarist and Rena took over as the frontwoman. After the arrival of the new guitarist in the band, they released their new single This Is Why on March 19, 2015.

The band released their new single "This Is Why" in March 2019 and days later they announced that they signed with Hi or Hey Records, the record label created by 5 Seconds of Summer in Partnership with Capitol Records.

Lain Shipp became the new ba s sist of the group and was introduced to the fans during 2016's Sounds Live Feels Live World Tour. After a new member joined the band, they released an EP Brand New Moves. Later on, they released their another album From the Outside. In August 2017, their rhythm guitarist, Miller left the group.

Rena Lovelis' net worth is estimated to be around $4 million. She earned some decent amount of money form her singing career. She started working for the musical band since 2008 and it was the major source of her income.

While she was with the band, the band released several hit songs and albums which earned a beautiful amount of money for her. Besides, she went on several tour with her band which also helped her to earn some decent sum of money.

She has a pet dog named Sarabella.

Rena Lovelis is currently in a relationship with a singer Robbie Picker. On 7 January 2018, Rena shared a snap with her musical artist boyfriend that they went on an adventure through a subway and enjoyed their outing.

Looking at their love life, they are deeply in love, however, the couple hasn't revealed whether they have any plan to tie the knot any soon. As a fellow musical artist, they have been supporting each other and they even have covered a song called My Everything Together.

In the below-shown video, Rena Lovelis can be seen with her other Hey Violent members in an interview.

You May Also Like: Paul McCartney, Joseph Adam, Nicholas Petricca, and Randy Owen