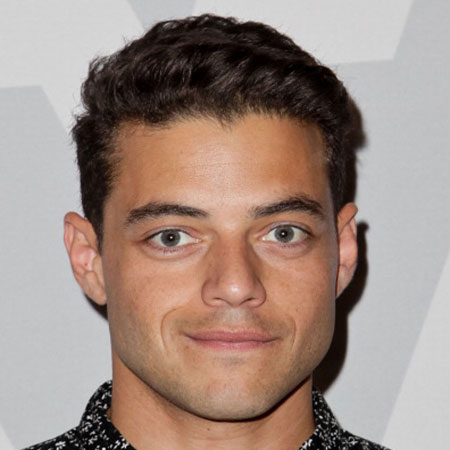 Born and raised in Los Angeles, Egyptian-American actor Rami Malek came to limelight and gained worldwide attention following his major role in the Mr. Robot. And the actor's career reached a new height when he got the main role as rocker Freddy Mercury in the super-duper movie Bohemian Rhapsody. Following the well-received release of the movie, the actor also won Oscar Award.

Rami was born on May 12, 1981, in Los Angeles, California, United States. He spent most of his childhood days in Los Angeles along with his twin Sami and an older sister. Rami parents are Egyptian. Rami's father was a tour guide. He comes from a Greek descendent also. Thus his ethnicity is a mixture of Greek and Egyptian descendent. He holds an American nationality.

Malek received his education from Notre Dame High School located in Sherman Oaks, California. He went on to attend the University of Evansville in Evansville, Indiana from where he received his Bachelor of Fine Arts degree in 2003.

Rami Malek went on to pursue his acting career in 2004 by guest-starring on television series such as Gilmore Girls, Over There, and Medium. After his fantastic performance, a year later he was cast as the noticeable recurring role of character Kenny, on the FOX comedy series The War at Home.

In 2007, Rami he appeared as character Jamie onstage in the Vitality Productions theatrical presentation of Keith Bunin's The Credeaux Canvas at the Elephant Theatre in Los Angeles. In 2010 Malek garnered a recurring role as character Marcos Al-Zacar who is the well-known Egyptian American suicide bomber on the 8th season of the Fox series 24.

He also bagged the role of Corporal Merriell "Snafu" Shelton on the HBO award-winning series The Pacific for which he was critically acclaimed. Rami was cast as a college student named Steve Dibiasi in the feature film Larry Crowne by Tom Hanks who found his performance noteworthy.

Malek then successively grabbed the role of the Egyptian vampire Benjamin in The Twilight Saga: Breaking Dawn – Part 2 for which he is credited. Not only that, Malek also plays the lead role of Elliot Alderson in the USA Network computer-hacker drama, Mr. Robot. Furthermore, Rami is noted to have made appearances in the independent films Ain't Them Bodies Saints, the remake of Old Boy and also in the critically acclaimed Short Term 12.

In the year 2018, the actor landed a significant role in the biographical film Bohemian Rhapsody sharing the credits with Allen Leech and Mike Myers. His role in the movie earned him tremendous fame winning several prestigious accolades like  Academy Award, Golden Globe Award, Screen Actors Guild Award and the British Academy Film Award under the category Best Actor.

Rami Malek has an estimated net worth of around $8 million, in 2019. The actor played the main role in the biopic Bohemian Rhapsody which became the quite hit at the box office grossing over $860 million worldwide against its production cost of $50 million. The actor obviously received a hefty amount of paycheque from the movie.

Rami Malek is not married yet but is dating his Bohemian Rhapsody co-star Lucy Boynton. The actor confirmed his relationship with his girlfriend Lucy during his acceptance speech for Breakthrough Performance of the Year at the 30th Annual Palm Springs International Film Festival. The couple seems much in love and savoring every moment they have together.

Malek is very focused on his career as an actor and thus is not seen with many women in the public. Not much is known to the media about his girlfriends or his dating history. He has not married till date.

However, there were rumors that he was dating actress Angela Sarafyan. He has not had any secret affairs as far as the public and the media knows. Rami is reluctant to speak about his personal life in front of the public.

Rami is not even linked to any actresses he has ever worked with Malek seems to be shy on these matters. He does not have any children to date. He has not disclosed any plans regarding his marriage. There have been certain rumors about Rami's sexuality as he is not seen with women in public. He is thought to be gay which may or may not be true.

He is subjected to no such controversy as he is of a shy nature. He looks more like a youngster than an adult. He has a structured face accompanying a well-built body.