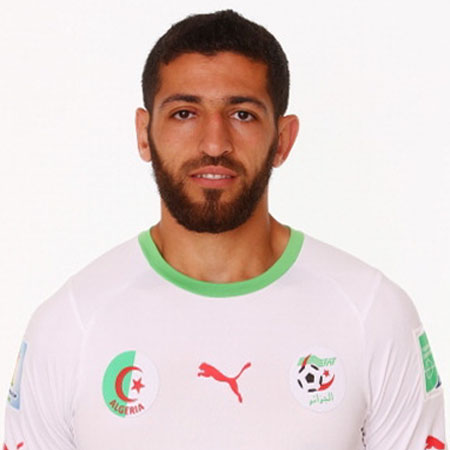 Rafik halliche, aged 27, is an professional  football player who plays for the nation Algeria and his current team is  portugese club  Académica de Coimbra.On football pitch , he represents himself as a central defender. He was born on  2nd september, 1986 at algiers,Algeria .Halliche started playing from the very early age of Seven, he joined Club CREPS Ben Aknoun at that time.His Development at child towards footballing was tremendously good.

He stayed at Club CREPS ben Aknoun for about Seven years, Then he moved toward the junior ranked NA hussein Dey. His debut as a Senior was made on january 30th januray , 2006. He was introduced in 74th minute of the game against Paradou AC in a league match. His Career actually took off from this same year.He managed to get one goal in 45 appearances in two years. He was the pivot of defense. His performance was of great level and of greater extent ,that  easily it would have attracted any of the european championship Side Clubs. And In the 2008th   january transfer window , he received interest from French , portugese side. Clubs like AJ Auxerre and Valenciennes FC were after him , but however on the 30th january he finnally came to an contract with S.L. Benfica for four years . But he was immidiately sent on loan by the portugese side to the fellow league outfit Nacional for 2008-2009 season . On m30th march ,2008 halliche made his debut as a substituion against club União de Leiria where he was introduced at a half time. His side won  by 2-0 score that game. eventually  club Nacional , halliche temporary Club extended his stay for one more season that is for the following season. In the period of those two years he got chance to feature in 34 matches and he presented a good display , opting various english teams towards him. Various english team’s attension was attracted by his Display. An english premier league team , Fulham made a succesfull bid on him , and halliche couldn’t refuse to that . On the 23rd august , benfica made official that halliche has left the Club For an undisclosed fee and transfer to fulham was already completed. He Signed With fulham For Three years, but he really struggled his professional life there. He had made his debut for fulham on 8th january,2011 in the place of hangeland against Peterborough United in the FA Cup's third round tie where his side had won 6-2. At the first year he could not get chance to be featured for a single match . As he had to compete against the experienced and Good defenders, he could not show his Diligency towards the head coach at a training groud also. According to various news and sources, from where few pictures were also found,That, On 6th december,2011 he also went for the celtic trial , but nothing beneficiary was gained from there.But , however the following year the contract between the halliche and fulham was Breached by mutual consent, and He Finally left for Academica de Coimbra where he signed two years deal on 31st august,2012 .His current salary is not clear to public.

He had particapated for Six games for the algeria U-23 team. And for senior team he has been capped for about 21 times .Halliche Debut was made against the Senegal on 31st may , 2008 . He was introduced as a substitute in the 75th minute.He had Scored a Vital one goal for his international side against Mali. He was Picked to represent algeria,as one of the promising algerian footballer, on the world Cup 2010 , South africa.

His agent name is Danko Dikic , who negotiates on the behalf of rafik halichhe.

Award and Achievement
No any Significance achievement yet. Rafik Halliche’s height is 186 cm long and has 84 kg of weight. He wears no.5 jersey for his club.