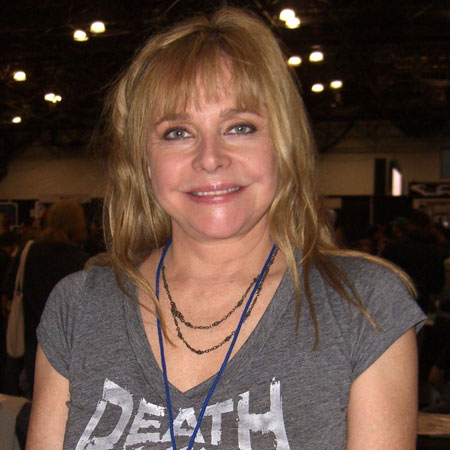 Priscilla Barnes is an American Actress. She is best known for in role as Terri Alden on Three’s Company. She appeared in other movies such as A Vacation in Hell, Licence to Kill, Mallrats, The Devil’s Rejects. Her television works include Jane the Virgin, The American Girls, and The Minutes Collection.

Barnes is a married woman but has no children. The pair tied the knot in 2003.

Priscilla Barnes was born Priscilla Anne Barnes on December 7, 1955, in Fort Dix, New Jersey, U.S, under the birth sign Sagittarius. She holds American nationality and is of White ethnic background. She is the third child of her parents.

Barnes spent most of her childhood by travel across the various military base in the USA before her family settled in California. Her father who was a major in the U.S Air Force and her mother a homemaker.

Barnes graduated from Antelope Valley High School at the age of 17 years old. After graduation, she moved to San Diego where she started working as a waitress and a dancer in her earlier age.

Barnes appeared as an Amazon in the DC Comics-based  TV series, The New Original Wonder Woman with Lynda Carter as the title character. Six months later, she appeared in the episode of Columbo, which led her to make appearances in movies like The Senior and The Delta Fox.

Barnes starred in Aaron Spelling’s The Wild Women of Chastity Gulch in 1982. She was cast as Terri Alden on Three’s Company in 1981 after Jenilee Harrison worked as an interim replacement to Suzanne Somers. Her notable role in the series brought her to instant public recognition. The series, Three’s Company was canceled by ABC in 1984.

Barnes co-starred as “Vicky Hatfield” in Bad Blood: Hatfield and McCoys. She also appeared in Disaster Wars: Earthquake VS Tsunami in 2013. She played “Magda” on the CW series Jane the Virgin in 2014 alongside Gina Rodriguez, Andrea Navedo, and Yael Groblas, among others.

Priscilla Barnes' Net Worth And Salary

Barnes' net worth is $1.5 million at present. She earns the huge amount from various other sources as well. She has appeared on the shows as "Columbo", "Wonder Woman", "The Rockford Files", "The American Girls", "Starsky & Hutch", "Kojak", "Taxi", and "Vega$", as well as a number of television movies.

The actress stands the height of 1.7 meters (5 feet 6 inches). She is active on Twitter with thousands of followers.

Barnes sued Penthouse in 1975 for re-publishing her nude pictures under her real name. She cites the main reason behind posing nude photographs that appeared in Penthouse Magazine was because she was broke at the time. She added, she posed for the magazine because she believed that her real name would not be used. She was paid $2000.

Barnes is a married woman. She has been married to Ted Monte, a famous actor since 2003. The couple is having a good time as seen in their recent pictures on social networking sites.

Barnes currently lives in Los Angeles with her husband. They have been spending several years of their relationship together.

Let's check out the video of Priscilla Barnes, she discusses acting in Three's Company, The Devil's Rejects, and The Crossing guard, and working with John Ritter, Don Knotts, Jack Nicholson, Sean Penn, and Rob Zombie.