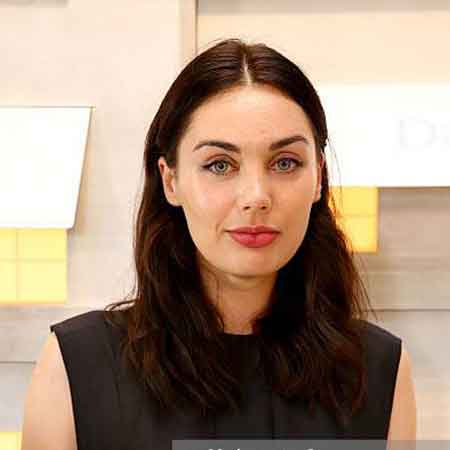 Gorgeous English actress Poppy Corby-Tuech is best known for her appearance in the movie Dracula: The Dark Prince. The actress notably worked in the television series The Royals.

Additionally, she is also known as a lookalike of Angelina Jolie for a similar facial structure. The actress prefers to lead a private life but she regularly appears on the screen with her back to back TV and movie roles.

Moved to the UK From France At Age 9

Poppy Corby-Tuech was born as Poppy Colette Corby-Tuech in France. At the age of 9, she moved to the UK from France with her family.

She is of British-French nationality and belongs to Caucasian ethnicity. She has kept information about her birth date, parents and siblings a secret.

Being born in French, she is a fluent speaker of both French and English.

At the beginning of her career, Poppy Corby-Tuech was a part of the English post-punk electro band White Rose Movement from the year 2008 to 2010. Gorgeous Poppy also worked as a model in her early career days which was a great help for her financial issue and for her personality development.

Poppy began her acting career in 2013 from the American fantasy horror film Dracula: The Dark Prince. In the movie, she played the character of Demetria. Poppy shared the screen with popular actors like Luke Roberts, Jon Voight, Kelly Wenham, and others.

Likewise, she starred in the television show Father Brown in 2015. In the show, she was cast as the character Caterina Beresford. The same year, she also appeared in the miniseries This Is England '90.

The actress then notably worked in the American prime time television soap opera The Royals from 2015 to 2016. In the popular show, Poppy was cast as the character Prudence.

Similarly, in 2016, she appeared in the web-television drama series The Collection. In The Collection, Poppy played the role of Dominique for the seven episodes. The same year, the actress starred in the movie Una.

The actress played the recurring role of Marie-Louise D’Aubigne, a French-speaking prostitute. The same year, she was featured in the music video of the English synthpop duo Hurts' single Ready to Go.

The gorgeous actress Poppy Corby-Tuech will be seen in an upcoming movie Fantastic Beasts: The Crimes of Grindelwald. The movie is set to release on the 16th of November 2018.

Poppy has been seen sharing screen with renowned actors like Eddie Redmayne, Katherine Waterston, Ezra Miller and Johnny Depp. The actress is playing the role of Vinda Rosier.

For her appearance in the several small-screen projects, the stunning actress proved herself as an acclaimed actress of Hollywood.

Poppy is often compared by the Hollywood divas Angelina Jolie and Cillian Murphy for her similar facial structures to the stars.

The emerging actress Poppy Corby-Tuech is enjoying a decent career from the beginning. For her appearance in multiple notable movies and television series, she is definitely making an impressive amount of money.

Corby-Tuech has not disclosed the figure of her net worth but sources have estimated Poppy's total fortune to be $1 million.

An average salary of an actor is around $50,110 per annum so he also might be earning his salary in the same range.

Is She Dating a Boyfriend or Single?

Poppy Corby-Tuech is a secretive person who prefers to maintain a low-key personal life. The beautiful actress is most probably single as there are no single reports of her dating a boyfriend.

Poppy Corby-Tuech is a music lover and she loves playing piano during her free time. She is highly inspired by the American actress Brit Marling Poppy is a cat lover and has two cute cats in her home.