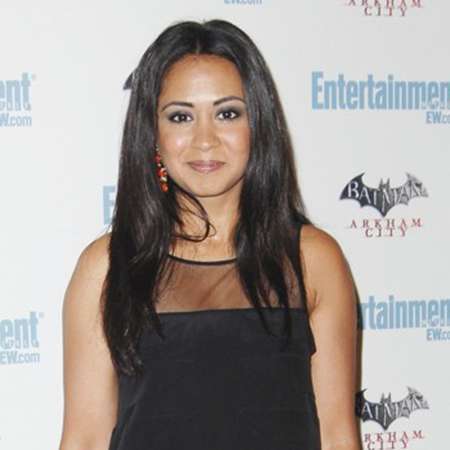 Parminder Kaur Nagra is an English film and television actress. She is famous for portraying Jess Bharma in the sports comedy film Bend It Like Beckham (2002) and Dr. Neela Rasgostra in the NBC medical drama series The Blacklist from 2013-14.

She has appeared in main and supporting roles in several films and TV series. She started her acting journey in theater shows in the 1990s. In 1996-98, she appeared in a medical drama series Casualty. She made a cameo appearance in a TV movie King Girl in 1998. In 2018, she appeared in a Netflix thriller drama 13 Reasons Why’s second season.

Parminder Nagra is a British film and Television actress. She was born on 1975 October in Leicester in England. She was born to a Sikh family as the eldest daughter. Her parent’s names are Sukha and Nashuter Nagra.  Her Zodiac sign is Libra. Her parents are from India.

They migrated from India to England during 1960s when there was a trend for factory workers to shift to Britain. She attended Northfield House Primary School and later got her college from Solar Valley College. She also appeared in youth orchestra then and that was probably her first ever musical show.

After she completed her A-levels she was approached by her theatre teacher for a theatre program in a chorus. But later she was transferred as a lead actress. She began her career in 1991.

Her first theatre performance happens to be in 1994 as Princess in Sleeping Beauty at Theatre. She also worked in some Indian Theatre like Tara Theatre and Tamasha. She also appeared in a medical drama Casualties and also she had a small role in King Girl.

She also appeared in a drama named Turning World. She made her appearance in a comedy show named Goodness Gracious Me.

Her major appearance happened to be in Bend it Like Beckham. Further, she contributed to other movies like Dushmani, Park Stories, The Swap, Twelve Night, Second Generation, In your Dreams, Twenty8k and  Horry Hendrid: A movie.

From 2016-17, she portrayed Ellen Nadeer in the action series Agents of S.H.I.E.L.D. She also appeared in a TV series Fortitude. Nagra played Counselor Priya Singh in the second season 2 of Netflix thriller drama series 13 Reasons Why. The series also featured ensemble casts including

In 2005, she lent her voice in the animated film Maya the Indian Princess. In 2008, she did a voiceover work in DC’s superhero movie Batman: Gotham Knight. She then appeared in a British-American 3D animated movie Postman Pat: The Movie.

Apart from being in front of a camera, she has also given her contribution behind the She has been awarded various till now. She has already won 6 awards till now. She won Asian Excellence Awards in 2007, South Asian Students’ Alliance in 2005. She also won Ethnic Multicultural Media Awards, Movieline Young Hollywood Awards, Fifa Presidential Award and Golden Wave Award.

Parminder Nagra's Net Worth And Salary

The popular actress Parminder Nagra earns a decent amount of money from her acting career. Her estimated net worth is $1 million. According to a source, Hollywood TV stars earn $15K-$1 million each episode. So, she also somewhere in the above range. She received a $50K salary from an episode of the 13 Reasons Why.

James Stenson is not dating anyone publicly. She previously married to Photographer James Stenson. She married photographer boyfriend James Stenson in 2009. But later, in November of 2012, she filed a divorce from her Husband. Their divorce was finalized in 2013. She also has a son named Kai David Singh Stenson with her then-husband. Since then she has not involved in a relationship with anyone.

She met on the set of the Fair Ladies at a Game of Poem Cards, Nagra met Irish actor Kieran Creggan with whom she later moved into a flat in Kennington, South London. The duo dated for five years before separating from each other. She also sings and plays an instrument during her leisure time.

She carried the Olympic torch in the London Summer Olympics 2004. That’s an honor that very people get the opportunity to experience and it’s one more example of how she makes the most of every chance that comes her way.

She has an amazing personality. She was filed a case by her ex-husband for hiding her money or worth value with false attitude during breakups share which turned out to be a hard thing to pass over for the couple.