As a voice actor, Brewster voiced Elise and Mr. Mumbles on Dan Vs. and Judy Ken Sebben / Birdgirl in Harvey Birdman, Attorney at Law and Birdgirl.

Paget has a younger brother, Ivan Brewster. The 52-year-old grew up in Massachusetts and attended the New England boarding school where her parents were teachers. She attended Parsons School of Design in New York City but dropped out a year later to pursue an acting career.

Brewster is married to her longtime boyfriend, composer, and musician Steve Damstra. He was a ba s sist of the three-piece band Whirlwind Heat and a member of the band named Folded Light. Brewster and Damstra met via a mutual friend in the late 2010s.

The couple got engaged on March 17. 2013. Brewster announced the news on Twitter along with a photograph of the jade engagement ring on her finger. "It's jade. And he's the best. Wait for the best, ladies, wait until you're 44 if that's what it takes!" the 52-year-old wrote. 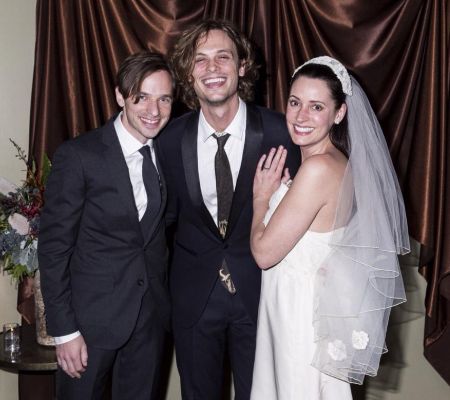 Following a year-long engagement, Paget and Steve tied the knot on November 28, 2014, in Los Angeles, California.

The wedding ceremony was officiated by their mutual friend and Paget's Criminal Minds co-star Matthew Gray Gubler. They do not have children as of now and reside in Los Angeles.

According to Celebrity Net Worth, Brewster has a net worth of $9 million as of 2022. She worked on a late-night talk show in the San Francisco Bay Area at KPIX-TV from 1994 and 1995.

The 52-year-old first gained recognition after landing the recurring role of Kathy in the fourth season of NBC's Friends.

Nominated For The Daytime Emmy

Her other notable credits include DuckTales, for which she earned a nomination for the Daytime Emmy Award for Outstanding Performer in an Animated Program.