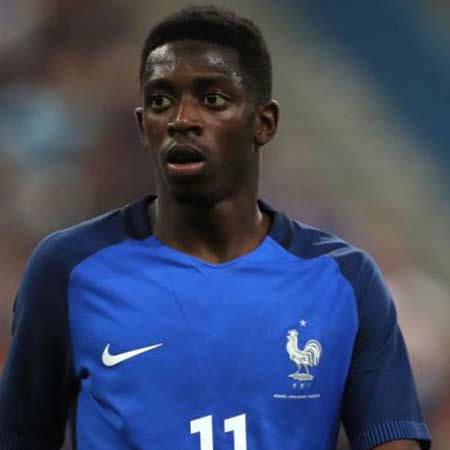 Ousman Dembele is a French professional soccer player and a former forward of the German club Borussia Dortmund. He currently, plays for the Spanish giant FC Barcelona, signed for €105 million which made him the highest paid teenage player.

Dembele scored his first goal for Barcelona on 14th March, netting the second goal in a 3-0 second leg win in Champions League.

He has been included in France 23-man squad for the 2018 World Cup.

Dembele was born on May 15, 1997, in Vernon, France. Dembele had a keen interest in football and began to play from his early age. He holds French nationality and is of Mixed ethnicity (as his mother is of Mauritanian and Senegalese descent and father is from Mali).

Dembele made his first senior debut for Rennes reserve side in Championnat de France Amature, coming in as a 78th-minute substitute for Zana Allee on 6th September 2014. He effectively set up Alseny Kourouma for the second goal in a 2-0 in a home win against Guingamp.

On 12 May 2016, he moved to the German club Borussia Dortmund on a five-year contract. During his spell in Dortmund, he appeared in 32 matches and netted 6 goals. His gameplay is compared to several top players like Cristiano Ronaldo and Lionel Messi.

On 25th August 2017, he transferred to Spanish club FC Barcelona for  €105 million ($126 million) and became the second highest paid player along with Paul Pogba.

Previously, Neymar Jr. had just shifted to the French club Paris Saint-Germain for the record-breaking transfer amount of €222 million.

In his debut match for Barcelona, Dembele assisted Luis Suarez for the final goal. When he played against Getafe CF, he injured himself and was ruled out for almost four months.

In the international level, Dembele has represented his national team in U17, U18, U19, and in U19 matches, He earned his international matches cap for the senior team on September 2016 and netted his debut goal in 3-2 friendly victory against England.

Dembele was called up to the senior squad of France for the first time to face Belarus and Italy after Nabil Frkir and Alexandre Laczzette withdrew due to injury. On May 17, 2017, he was included in the FIFA World Cup 2018 squad of France.

Being a young and successful soccer star, Dembele earns a whopping amount of money from his profession. Currently, he receives $12 million annually from FC Barcelona. which builds up his estimated net worth around $30 million.

Dembele is also the owner of few cars which includes $36,350 Range Rover, $34,475 Mercedes Benz, and $103,225 BMW. He lives in a house paying 15,000 euros per month which has fives bedrooms, four cars parking garage, an outdoor temperature controlled swimming pool, and a cinema hall.

Dembele is an unmarried man. Currently, he is totally focused on his professional career instead of involving in a relationship. Meanwhile, he hasn't been spotted with anyone and has never spoken about his personal life in the media and public.

With the limited information about the rising players' love life, it can be assumed that he is single in the present days.

Below are the best moments of Ousmane Dembele career playing for Barcelona.