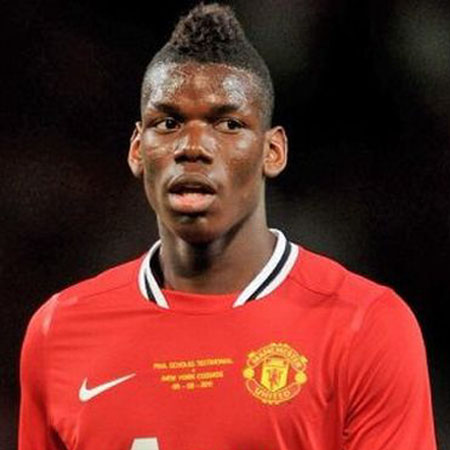 Paul Labile Pogba appropriately nicknamed as II Polpo Paul (“Paul the Octopus”) owing to his long legs, is an international football sensation. Primarily a midfielder, he also plays both attack and defense with equal precision. Currently, a national player for France, this young player has played for Manchester United and his current team is Juventus. Pogba wears jersey No.6. In 2018 FIFA World Cup, he scored the second goal to lead his side to victory against Australia.

Born on 15th March 1993, on Lagny-Sur-Marne, France, he was indulged into football since a very young age. He was born to father, Fa s sou Antoine Pogba and mother, Yeo Pogba.

Pogba’s career started at a tender age of six whereby he played for US Roissy-en-Brie for seven seasons. He then captained the US Torcy under-13 team for one season. His professional football debut was for the club Le Havre where he captained in his second season and pushed the under-16 team to the finals of the Championnat National des 16 ans. Though his team lost in the finals, this internationally acclaimed player’s skills were duly noted by domestic and international clubs like Arsenal and Juventus.

Despite a non-solicitation agreement of the Le Havre with Pogba, he decided to join the youth academy of Manchester United which led to a lot of controversies. He was allegedly claimed to be leaving the club for monetary reasons but he denied the allegations. Le Havre threatened to sue Manchester United in response to which Pogba’s former team US Torcy issued a press release stating that the same tactics had been used by Le Havre to lure Pogba. All this commotion finally ended when Le Havre and Manchester United reached an agreement.

Pogba’s transfer to Manchester United was completed on 7th October 2009. He appeared for 21 matches for the team with a total of seven goals in 2009-10 under 18 campaigns. For the 2010-11 season, Pogba played in the Premier Academy League in the academy team and was later moved to the reserve team. His long-range goals, for the team’s victory over Portsmouth and West Bromwich Albion, are described as a piledriver. On February 2011, he was promoted to the first-team squad and a s signed a number 42 shirt. Pogba contributed two goals in the 6-3 win in the FA Youth Cup.

In the 2011-12 season, he was permanently promoted to the reserve team for which he debuted in the Premier Reserve League match against Arsenal. His Premier League debut was against Stoke City on January 2012. His European debut was in the same month against Spanish club Athletic Bilbao in the UEFA Europa League.

Accusations of Pogba disrespecting Manchester United and signing a contract for Italian club Juventus without any prior notice was followed by his entry to Juventus and departure from Manchester. His debut for Juventus was in a pre-season friendly against Chievo. His exquisite goal skills and playing capabilities were highly praised by several Italian media outlets. Pogba played a key role in obtaining many wins of Juventus over many clubs and also the 2013 Italian Supercoppa trophy.

Pogba also was a French youth national team footballer whereby he captained the under-16 team. His international debut was in 2008 opening match against Wales. His first international goal was in the 2009 Aegean Cup Final against Norway. His under 16- campaign finished with 17 appearances and one goal. He was suspended from international duty by the French Football Association for six months following the allegations of breaking the contractual agreement with Le Havre. He later debuted and scored all winning goals in the matches of the Algarve Cup and 2010 UEFA European Under-17 Football Championship. His under-18 debut was at the Tounio de Limoges against Greece. Pogba made his under-19 team debut against Italy. The semi-final appearance of the team in the 2012 UEFA European Under-19 Football Championship qualified it for the 2013 FIFA U-20 World Cup. The team won the first-ever FIFA U-20 World Cup under his captainship. On March 2013, Pogba made his debut for French senior team for a 2014 World Cup qualifier against Georgia and has appeared in qualifier matches since then.

He scored the second goal for France in the 2018 FIFA World Cup match against Australia.

Paul Pogba's Net Worth and Salary

Paul’s relationship information is confidential and not much is known about his personal life. Even though he is very secrative person regarding his personal life, it is a known fact that he is yet to be married. Also, he doesn't seem to be involved in a dating relationship.