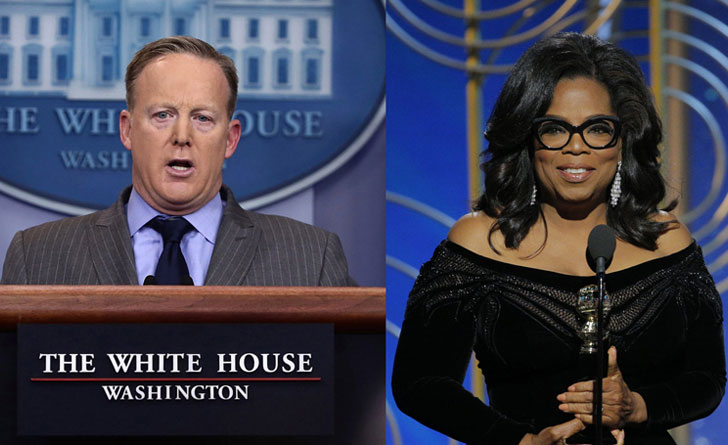 The former White House press secretary Sean Spicer has given his verdict on a possible Trump vs. Oprah Presidency scenario.

After Oprah Winfrey hinted that she could run for President in the 75th Golden Globe, the former secretary Sean, 46, argued with Good Morning Britain's Piers Morgan and Susanna Reid Monday morning.

Oprah Winfrey during a speech at Golden Globe Awards 2018

Spicer said Winfrey doesn't have sufficient political experience to be a US President. Spicer said,

The show host Piers Morgan interrupted Spicer and reminded him of Trump's past lack of political experience, and Spicer then tried to walk back to his comment and said,

Clearly President Donald Trump proves there is an appetite for outsiders and you don’t necessarily have to have that. The question is was that an anomaly or is that the new norm?

Later, he added, "I think if an Oprah Winfrey jumped in, I think it would be on the other side of the political aisle, that would be the test of that."

She’s extremely impressive… I think that you can’t make this stuff up. This would be the clash of titans. Hands down Donald Trump [would win] but I think Oprah would give him a run for his money.

Winfrey told Bloomberg Sunday night that she doesn't have any plan to run for the president currently, however, her longtime partner, Stedman Graham, told the LA Times, "it's up to the people. She would absolutely do it."