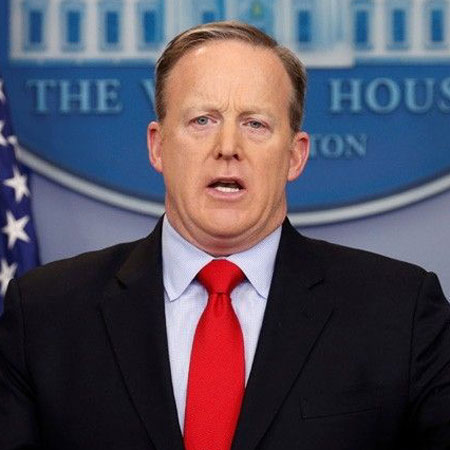 Sean Spicer was born as Sean Michael Spicer on September 23, 1971, in North Shore Hospital, New York, United States. He belongs to partial Irish descent and was raised as Catholic.

Spicer is the son of Michael William Spicer and Kathryn Spicer. His mother served in the East Asian Studies department at Brown University as a department manager while his father was an insurance agent.

He Is A Naval War College Graduate

In the year 1989, Spicer attended Connecticut College and graduated with a Bachelor of Arts in government in 1993.

In April 1993, Spicer wrote a letter to the student paper, referred Spicer as "Sean Sphincter''. After that, he submitted an angry complaint to the paper and followed up by pushing for college judicial action against the paper. He later received further ribbing from the campus satirical publication Blats.

Spicer enrolled at the Naval War College in Newport, Rhode Island for his further study. He received a master's degree in national security and strategic studies from there in 2012.

In the year 1999, Spicer joined as a public affairs officer in the U.S Navy Reserve where he currently holds the rank of Commander.

Spicer became the Communications Director on the House Government Reform Committee from 2000 to 2001. He was also worked as director of the incumbent retention at the National Republican Congressional Committee for one year since 2001.

In 2009, Spicer was the partner of Endeavor Global Strategies, a public relations firm and also co-founded to represent foreign governments and corporations with the business prior to the U.S government. He served full-time at the firm until February 2011.

Spicer became Communications Director of the Republican National Committee in February 2011. He was given an additional role as a chief strategist in February 2015.

Spencer was entitled as the White House press secretary for Donald Trump on December 22, 2016. He made an announcement of his resignation as White House Secretary on July 21, 2017.

Spencer also made the third appearance in the SNL dressed as the Easter Bunny on April 16, 2017. He even apologized for the remarks made on Hitler.

He has compared the gas attack in Syria with Hitler's Holocaust recently in a press conference. Check his speech on YouTube.

Sean Spicer has an estimated net worth of $6 million, according to celebrity net worth. He has made such a good amount of money from his successful political career.

Sean has a house in Middletown, Connecticut. He bought the mansion for $795k in 2001 with his wife Miller. It was previously owned by former national security adviser Michael Flynn and his wife, Lori. The 3,920 square feet house was built in 1950 and it has a colonial four-bedroom.

His wife Rebecca is the senior vice president, Communication as well as public affairs for the National Beer Wholesalers Association in Virginia.

They Are Blessed With Two Kids

The couple has two children. But, they have not revealed further about their children's details. As of now, Sean resides in Alexandria, Virginia with his spouse and kids. Sean and his wife Miller have been enjoying their married life for a long time now.

Spicer has the habit of swallowing gums. He swallows 2 and a half pack gums a day. Spicer assumed the position of the press secretary on January 20, 2017. Since then he is handling his job very sincerely. As press secretary, he drew some controversies for making controversial statements as well as to display the combative behavior with the media.

Firstly, on the day of Trump's inauguration, he falsely and insistently claimed that the crowds in the ceremony were the largest crowd. He also blamed the press as they had deliberately underestimated the number of spectators.