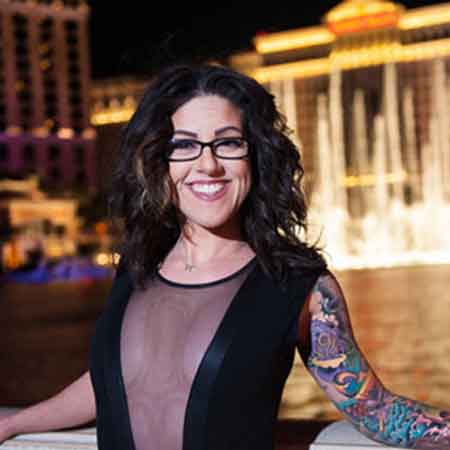 American actress and model Olivia Black rose to stardom following her breakout performance in the reality TV series Pawn Stars, appeared in 13 episodes of the series. She also produced the show Hardcore Club Restore. Black likewise works as a model for several comic conventions as well as renowned publications. Black is a proudly lesbian and is married to Chef Maria for a long time.

Olivia Black was born in the United States of America. She belongs to American nationality and regarding her ethnicity, she is White-American.

Click the video given below and learn some amazing facts about Olivia Black:

Her exact birth year is not revealed. But as per her Facebook page, she celebrates her birthday on October 17. She is quite secretive about her family background. There is nothing about her parents and siblings.

Black grabbed attention and gained international fame following her significant role in the American reality TV series Pawn Stars. She appeared in 13 episodes for the show from 2012 to 13 sharing the screen alongside Rick Harrison, Richard Benjamin Harrison, Corey Harrison, and Chumlee.

Olivia Black's Net Worth And Salary

Black's per episode earning were never disclosed, unlike other Pawn Stars cast members. Her co-star Chumlee's salary was $25K per episode, therefore we can assume that Black could've been making somewhere between $5K – $10K.  She also modeled for several brands and her annual salary is around $65k.

Black has been the promo model for several brands and has performed in the Celebrity Trixi Rocky Horror Burlesque Performance. In addition, she is linked with publications including Inked Magazine, Inked Girls, Tabu Tattoo, Enquirer, and Fox News. She was also the Dollies & Doggies Calendar Model and Las Vegas ASPCA Benefit Event Host.

Olivia Black is a married woman and is also proudly lesbian. For a long time, she is married to Chef Maria. The two together also operate the sex toy online shop called, barenakedmob.com.

Together, they are also running their own YouTube channel under the title Miss Olivia Black. They are leading their professional and personal life hand in hand.

Olivia Black stands at the height of 5 ft 5 inch and her weight is 52kg.