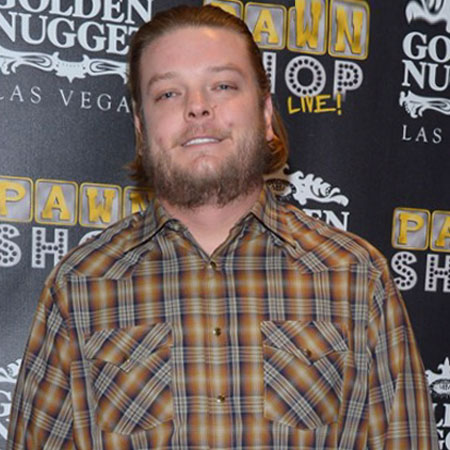 Corey Harrison, ‘’Big Boss’’, is an American businessman and reality television personality. He is known as a cast member of the History TV series ‘Pawn Stars’. The show documents his work at the Gold &Silver Pawn Shop that he co-owns with his grandfather Richard Benjamin Harrison and father Rick Harrison in Las Vegas.

Who Is Corey Harrison?

Corey Harrison was born on April 27, 1983, in Las Vegas, Nevada, United States of America. He is the son of Rick Harrison and mother, Kim Harrison.

Corey Harrison has three brothers, Christopher Harrison, Adam Harrison, and Jake Harrison. Spending most of his early childhood days in Las Vegas, Corey did his schooling from his hometown's school.

Harrison holds American nationality and as far as his ethnicity is concerned, he is White.

Corey Harrison is professionally a businessman and a TV personality. He started working in his family’s pawn shop at the age of 9.

Corey Harrison is now 34, but he still works with his grandfather and father in the same pawn shop, ‘Gold and Silver Pawn.' The pawn shop now has a reality TV series, ‘Pawn Stars,' and pulls in over 3 million viewers per episode.

Corey Harrison is in charge of the store’s daily operation and its 30 employees. He wants to be the boss one day with his persistent efforts and dedication. However, things are not always smooth sailing for Corey as he is often at loggerheads with his dad and grandfather about his responsibilities as a manager.

In 2011, Corey Harrison also published his book ‘License to Pawn: Steals and Life at the Gold and Silver’.

Corey Harrison has an estimated net worth of $4 million, according to celebrity net worth, in 2019. The major source of income of Corey is his career as a reality TV personality and as a businessman.

Is He Dating Anyone At Present After Divorcing His Secong Wife?

Corey Harrison is a married man. He got married to his college sweetheart Charlene Harrison in 2009. Their married life, however, did not last long and they divorced in 2015.

Since his divorce, Corey Harrison is reportedly dating Roxy Gonzalez. The couple dated for a few months. Corey then tied the knot with Korina Harrison, in July 2017, in a private wedding ceremony. He filed a divorce from his second wife in August 2018 and their divorce was finalized on 10 September 2018.

Even after their divorce, the former couple is quite close.