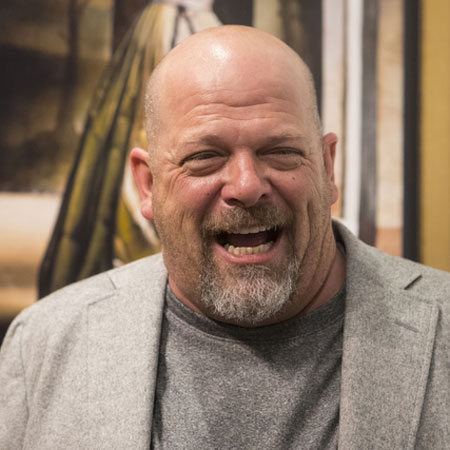 Rick Harrison is a popular American businessman and reality TV star. He is best known as the co-owner of the World Famous Gold & Silver Pawn Shop which features on History series, Pawn Stars.

Harrison married Deanna Burditt in 2013, and the duo is proud parents of two children. Previously, he has been married twice and has three sons.

He grew up along with his brothers,  Sherry Joanne Harrison (died at age 6), Joseph Kent Harrison and Christopher K. Harrison. Nationality-wise, he is American and belongs to the White-American ethnicity.

In 1967, Harrison along with his family shifted to San Diego, California because of his father's job. When Harrison was 8, he suffered from epileptic seizures, so, he was unable to participate in sports which developed his interest in reading, books related to physics and history, his favorite being books related to British Navy.

Harrison joined Taft Middle School but dropped in the tenth grade. In April 1981, Harrison and his family relocated to Las Vegas, Nevada after the collapse of his parents' real estate business.

In 1981, Rick Harrison and his father opened the Gold & Silver Pawn Shop little away from Las Vegas. By 2006, he was known as a pawnbroker in Las Vegas for having special sports items. His collection included 2001 New England Patriots Super Bowl ring which belonged to American football cornerback Brock Williams.

According to Harrison, most of the items brought to his store were jewelry. Since the inception of Pawn Stars, Harrison inventory has a ratio of 5,000 items pawned per 12,000 overall. He was awarded  Pawnbroker of the Year 2010 by National Pawnbrokers Association for his contributions in notifying the public about the pawn industry.

In 2003, his shop featured in the show Insomniac with Dave Attell which inspired him to start his own show related to pawn. Later, Brent Montgomery and Colby Gaines of Leftfield Pictures visited Harrison with an idea about a reality show based in a Las Vegas pawn shop. The series was first offered to HBO, but due to some issue, the show got canceled.

Later, the show was picked by History Channel with slight changes which include on-camera experts evaluating the items brought into the Gold & Silver as well as personality dynamics of the store's staff. The show was initially named Pawning History but was changed to Pawn Stars after Leftfield's staff's suggestion. The show features Harrison and his father along with his son, Corey and Austin Russell, Corey's childhood friend and employee.

In January 2011, Pawn Stars was known as the highest rated program on the History Channel and second-highest ranked reality show. Harrison and his son, Corey appeared in one of the episodes of iCarly. He also appeared in one episode of The Middle as an antique store owner.

Harrison has successfully established himself as an author too. In 2011, he published two books, License to Pawn: Deals, Steals, and My Life at the Gold & Silver. On June 2011, the book ranked 22nd on New York Times Best Seller list.

He endorses the brand, Micro Touch One Razor in January 2014. The same year, he along with his son and his friend, Chumlee participated in the game show, Pawnography.

Rick Harrison is happily married to Deanna Burditt. The duo exchanged vows on July 21, 2013, in Laguna Beach, California in an intimate private ceremony. Danny Koker, a car expert, became an ordained minister and performed the ceremony while his Pawn Stars co-star, Chumlee served as a ring bearer.

Harrison first married his high school girlfriend, Kim in 1982. He was just 17 when Kim was pregnant with his baby. Despite a subsequent miscarriage they decided to get married.

The duo welcomed their first child, Corey Harrison on April 27, 1983. After two years, the pair welcomed their second child, Adam Harrison (born on 1985). But soon after the birth of Adam, their differences started to affect their marital life, and they decided to separate. In 1985, the pair officially divorced.

His son, Corey Harrison appeared along with him in History show, Pawn Star and his second son, Adam Harrison worked at the pawn shop and later became a plumber.

Harrison married Tracy in 1986. Tracy took all the responsibilities of his children and raised them. They together have a son, Jake Harrison.

In 2016 election, he endorsed Marco Rubio for President though he was a libertarian. He stated,

"Rubio knew what it was like to live paycheck to paycheck, having done so in his youth. I think my endorsement has alienated some viewers of Pawn Stars."

"When you endorse a Republican, everyone sort of frowns on you."

Later, Harrison returned to his libertarian roots after Rudio dropped out from the election and attended TheBlaze Libertarian Debate. Harrison also criticized Hillary Clinton as he believed she lacked foreign policy achievements.